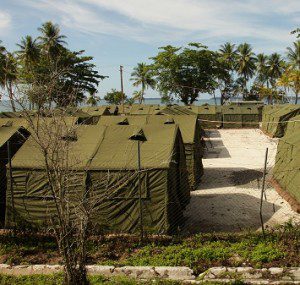 My old sparring partner Gary Lucas, the former mayor and councillor at Liverpool, sent me this note last week:

“We are up in Queensland where it is warm. How are you coping with the paper and retirement?

“The attached is a request to the Federal Member for Hughes Craig Kelly, for your attention.

“Personally I believe that the suggestion has merit and that the government should at least give it  consideration.

“Craig, as we have a number of refugees in detention centres can it be run past the Minister responsible to consider the following:

1. Resettling families to the regional area towns of Australia.

2. They must as a priority have families and be forced to stay for at least  5 years.

“The spin off to the taxpayers is the cost of maintaining the detention centres being reduced along with the struggling towns gaining extra population.

“At least have a go at this suggestion.

“The outback towns are struggling and such an influx of these refugees will help in more ways than one. “Moving them from the detention camps will help our own economy by not paying to keep them locked up. “We can give them a choice of going to the outback cities/towns for a mandatory 5 years and to then apply for permanent visas status.’’

To put it in perspective, this suggestion, full of humanity as well as practicality, comes from a conservative man, not some loony, bleeding heart leftie.

Lucas, who has lived in Chipping Norton for many years, has flown the Liberal Party flag over the years during his political career.

No doubt he supports the government’s turn back the boats policy, which has been very successful in not only reducing the number of asylum seekers but also prevented the loss of many lives in the high seas.

It’s the most natural thing in the world to want to know who’s coming into your patch, whether it’s your house or your country.

But without getting into the merits or otherwise of asylum seekers, most people would like the government to process their application for refugee status a little quicker.

It doesn’t matter whether they are genuine refugees or not; we should keep them in detention centres as little as possible, and either settle them here or send them back where they came from.

Now as to the suggestion by Gary Lucas to help regional areas, well, of course it’s a good idea and I hope Craig Kelly sees it that way and lobbies his own government to at least examine it.

But they still need to look at speeding up the processing of these wretched people; apart from anything else it will save us money and the Budget bottom line is crying out for a boost.

In an ideal world there would not be any refugees, but there has never been such an idyllic state and probably never will.

Solutions like this one by Gary Lucas deserve to be considered, even if he came up with it while enjoying the warm Queensland sun.

What have we got to lose?

More than 40 years experience in the news media, most of them as editor of local newspapers across the Sydney metro area, but a few years working as a sub-editor with the metros. Lots of awards, both as a reporter and editor, but says he values just as much Community Service Awards from Campbelltown City Council in 2004 and 2016. Took a voluntary redundancy in 2014 from Fairfax Community Newspapers after 21 years there. Loves the digital world, because ''there's no question it's the future''. Eric promises his hard hitting but fair approach won't change when he reports the news via cyber space.
View all posts by Eric Kontos
Art competition puts spotlight on our threatened species
Roosters crowing after edging out Roos