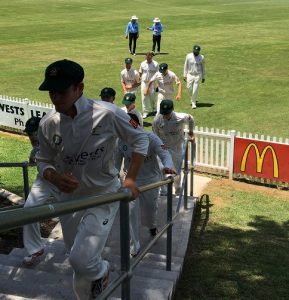 Job well done: The Ghosts trundle off the field at lunch on Saturday.

It’s been a tough season but things may be about to get a little brighter for the Camden Campbelltown Ghosts cricket club.

The first grade team are on the verge of recording their maiden victory of the season after a superb effort on the field to restrict Mosman to 234 on Saturday.

At close of play in this round 11 fixture of the Sydney Premier Cricket premiership, the Ghosts had replied with 55 runs for the loss of two wickets.

The home side lost opener Aaron Yabsley, who was dismissed when he was on 21 and the score at 31.

Captain Nick Carruthers also fell just before stumps when he was out after scoring just four runs and the total was on 48.

But there’s eight wickets to go and the Ghosts are only 180 runs from their first victory in the 2016-17 season.

Opener Mitchell Carruthers is still there on 28 not out and hopefully nightwatchman Jordan Browne (1 not out) will hang around for a while next Saturday and frustrate the Mosman attack as the Ghosts go after those 180 runs.

In the field, while English import Monty Panesar took 3 for 55, the standout performance was from young fast bowler Iain Carlisle.

The 17 year old had the Mosman batters ducking and weaving and he was unlucky not to pick up more than the two scalps he claimed.

The future of the Ghosts will rest on the shoulder of players like Carlisle and some of the younger batsmen.

Hopefully the Ghosts are able to keep Carlisle in their ranks for a few more seasons as they build a team capable of winning a Sydney grade premiership in the not too distant future.

In the meantime, the Ghosts will be content with winning this match against Mosman.

Play will resume at 10.30am on Saturday.