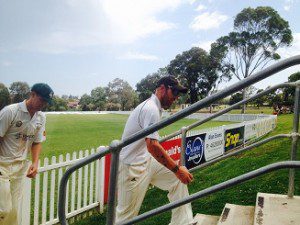 Former Ghosts skipper Scott Coyte scored 100 in a huge partnership with Ryan Gibson, who scored a second consecutive double ton against Gordon on the weekend.

Gibson hit two sixes and 29 boundaries in amassing 217 against Gordon at Chatswood Oval on the weekend.

Just seven days earlier the Ghosts batsman put on a batting master class in producing an unbeaten 204 against Blacktown at Raby Sports Complex.

He really followed up on Saturday against Gordon.

Gibson demolished the Gordon attack, such as it was, helping the Ghosts to a massive total of 402 off their 96 overs.

The Ghosts won the toss and elected to bat.

The pair put on a partnership of 229 before Coyte was dismissed on reaching three figures.

The second consecutive double hundred confirms that Gibson is destined for higher honours. 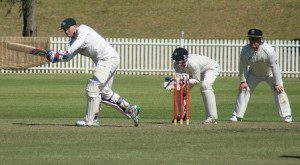 Ryan Gibson out in the middle.

And his efforts are set to help the Ghosts play a part in this year’s finals, especially if he can continue to bat like he has in the past couple of games.

The match against Gordon will be completed next Saturday, weather permitting, and the Ghosts will just about wrap up a semis spot with victory at Chatswood Oval.

In the final round the Ghosts will again travel to the north of the harbour, to take on Northern Districts at Mark Taylor Oval in a one day clash.

In other grades from the weekend, the Ghosts women’s first grade succumbed to Gordon after making 201 and the hosts responded with 6 for 258.

Both the men’s second and third grades were defeated by Gordon after posting low scores.

The Ghosts seconds made just 80 and Gordon declared after losing four wickets for 81.

In third grade the Ghosts did marginally better, scoring 93, Gordon declaring after reaching 101 for the loss of four wickets.