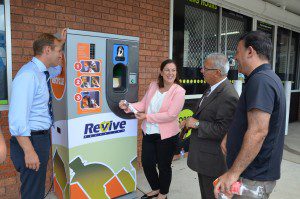 MP Melanie Gibbons last week joined Environment Minister Rob Stokes and Liberal candidate for Liverpool Mazhar Hadid at Hammondville Shopping Centre to try out one of the new reverse vending machines that will soon be introduced across the state.

Ms Gibbons, whose seat of Menai has been renamed Holsworthy, and Councillor Hadid welcomed Premier Mike Baird’s announcement that a re-elected Liberals & Nationals government will introduce reverse vending machines across the state as part of a cost-effective container deposit scheme for the recycling of drink containers.

“When we set the machine up outside my office, I was impressed by how straighforward the instructions were and how easy it was to use. It also attracted a lot of interest by passing shoppers who witnessed the demo,” Ms Gibbons said.

“The machine simply scans the barcode on the can or bottle and then you are issued with a credit for redemption later on,” Ms Gibbons said.

“Under this exciting new initiative, communities will be rewarded for their recycling efforts through the use of reverse vending machines at popular parks, waterways, beaches and other public spaces across NSW,” Ms Gibbons said.

“Reverse vending machines will be installed throughout Liverpool local government area – offering our communities the opportunity to be rewarded for contributing to positive environmental outcomes,” Cr Hadid said.

The government has promised to consult the community on the key aspects of the scheme, including:

• The incentives for the community to participate in the scheme;

• The location of reverse vending machines; and

• The role of our local councils and the recycling industry in contributing to the scheme.

“If re-elected, I look forward to further developing the scheme and delivering better environmental outcomes for our local community,’’ Ms Gibbons said.

“I’m proud to be part of a government that has listened to strong community concerns about litter and will introduce a container deposit scheme in just over two years.’’

Picture of the future has an Apple iCar in it
Caring for the carers: Strength 2 Strength