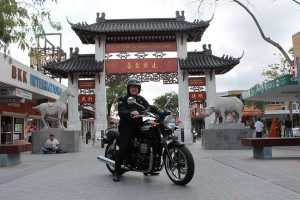 Refugees deserve a pat on the back: Chris Hayes in the heart of his electorate, Cabramatta, where many Vietnamese refugees settled in the 1970 and 1980s.

This week is known and celebrated across Australia as Refugee Week and Chris Hayes, the Federal Member for Fowler, says this is an opportunity to acknowledge and celebrate the contribution refugees have made over the years to the building of our local area and the nation.

“I am proud to be the representative of the most culturally diverse electorate in the country.

In fact, according to the ABS, nearly 50 per cent of Fowler residents were born overseas.

“Many of them fled horrendous environments back home, often facing immediate threats to their lives, to start a new life in their second home – Australia”, Mr Hayes said.

April this year also marked the 40th Anniversary of the Fall of Saigon and the settlement in Australia of the Vietnamese refugees, who are often called the original boat people of this country.

“Forty years ago we opened our arms and our shores to the innocent families who fled the communist regime,’’ Mr Hayes said.

“Many of them live in our local area and make a remarkable contribution to our country.

“Settlement in Australia often gives refugees a sense of hope and a second chance at a peaceful life for them and their families.

“Now is the time to celebrate the immense contribution refugees from many parts of the world make to Australia.

“They are some of the most entrepreneurial, hardworking members of the society.

“I would also like to praise the valuable work that the Migrant Resource Centres, including the Liverpool and Fairfield MRC in my electorate, do in our community to ensure people are properly settled and able to become part of the general fabric of the Australian way of life”, Mr Hayes said.

More than 40 years experience in the news media, most of them as editor of local newspapers across the Sydney metro area, but a few years working as a sub-editor with the metros. Lots of awards, both as a reporter and editor, but says he values just as much Community Service Awards from Campbelltown City Council in 2004 and 2016. Took a voluntary redundancy in 2014 from Fairfax Community Newspapers after 21 years there. Loves the digital world, because ''there's no question it's the future''. Eric promises his hard hitting but fair approach won't change when he reports the news via cyber space.
View all posts by Eric Kontos
Animal pests fight goes digital
The airport is coming: mayoral ball takes off