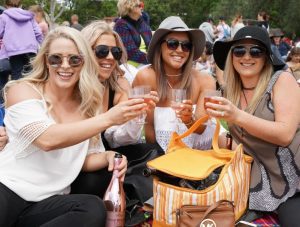 Let’s drink to that: a produce lane will be added to Camden’s Taste festival this year,

Camden Council is seeking applications from produce market stallholders for an exciting new addition to the annual Taste Food Wine and Music Festival.

Produce Lane will be launched as part of the festival and will showcase a range of fresh and local food.

The event is a feature of the Camden Festival that attracts more than 5,000 people and will include seasonal fruit and vegetables, meats, seafood, baked goods, spices, cheeses and specialty food products as well as food-related items and gifts.

The festival will be on Sunday, September 23 in Camden Town Farm.

“Taste is a highlight of our annual Spring celebration that continues to grow in variety and popularity,” says Mayor Lara Symkowiak.

“The addition of a produce lane will add another dimension to the event and allow people to take local produce home to enjoy,” she said.

“This is the perfect opportunity for local farmers, bakers, fromagers and others to showcase their products in the Camden community.”

Stallholders are invited to visit camdenfestival.com.au for more information and to apply.

A passion for companion animals is a must for anyone thinking of applying to become a member of Camden Council’s advisory committee.

Appointments to the committee will be for two years.

Applications to join the companion animal committee are open until Friday, July 28.

Construction of an amenities building at a new park on Burrell Road, Spring Farm is about to start.

The park was built by a developer as part of a voluntary planning agreement and quickly proved to be popular when it was opened last year.

Construction is scheduled to be complete by August 30.

Access to the park will be maintained during construction.

More than 40 years experience in the news media, most of them as editor of local newspapers across the Sydney metro area, but a few years working as a sub-editor with the metros. Lots of awards, both as a reporter and editor, but says he values just as much Community Service Awards from Campbelltown City Council in 2004 and 2016. Took a voluntary redundancy in 2014 from Fairfax Community Newspapers after 21 years there. Loves the digital world, because ''there's no question it's the future''. Eric promises his hard hitting but fair approach won't change when he reports the news via cyber space.
View all posts by Eric Kontos
Driver, 74, dies after car rolls at Hume Highway
Hospital clinic’s vital role in fight against scourge of diabetes

One Response to Produce lane will give festival tasty boost