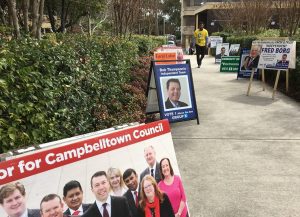 Voting is such an incredible privilege, whether we’re electing a prime minister or a local mayor.

Yet we seem to have forgotten how important it is that we not only turn up to cast a vote but to think hard about who will get our support.

Put some effort into it, in other words.

So many of us are very cynical of politicians – and who can blame us. Sam Dastyari is no more than the most recent addition to a conga line of disgraced politicians.

But we must never give up hope that things can change, that better times are ahead.

Maybe even better politicians, something that’s in our power to achieve.

Harnessing people power in electing our local council can be a better experience than when voting for state or federal politicians.

And this is what we must remember when we go into that voting booth: we are one individual of a very big group.

A group that can make a difference.

But that can only be achieved if we have tried to know as much as possible about our candidates and what they represent.

Whether your focus is on growth and jobs or protecting the environment, don’t worry, there’s more than one party or candidate to choose from.

But the important thing tomorrow, Saturday, September 10, is to get out and vote for the best possible people to run our town for the next four years.

Encourage your friends and relatives, especially young people, to look up the candidates online and go and cast their vote.