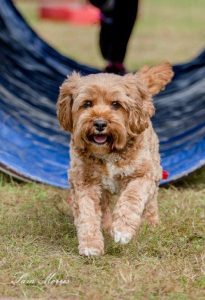 Camden’s Paws in the Park will; be on Sunday, May 7 this year.

There is plenty of fun planned for Camden’s furry four legged residents at the popular annual Paws in the Park on Sunday, May 7.

The free, annual event is hosted by Camden Council to encourage the caring and responsible ownership of pets.

“This is a celebration of dogs, their owners and a chance for everyone to enjoy a special community day in Camden,” says Mayor Lara Symkowiak.

“Pets are important to the health and wellbeing of residents. Dogs are family members and encourage a healthy lifestyle that includes walking, outdoor activities and connecting their owners with the community.’’

The event will be held during 9am-1pm at Camden Bicentennial Equestrian Park.

People can show off their pet pooch in a competition, pose with them in the photo booth, join a 3km walk and enjoy some of the entertainment on offer.

Competitions will begin at 10am for best trick, cutest puppy, fancy dress, ‘waggiest’ tail and best dressed in footy colours.

More than 40 stalls and displays will be available on the day, as well as discounted microchipping, dog registrations, free vet health checks, obedience and agility demonstrations.

♦ In other Camden news, council has now completed renewal works to the shared path in Harrington Park Estate.

The path surrounding Harrington Park Lake has now been reconstructed for the use of bicycles and pedestrians and completed to a high standard.

The old path was cracking, uneven and around 25 years old.

“Council is focused on providing recreational facilities and infrastructure to support the health and wellbeing of the community and the growing number of families in our area,” Mayor Lara Symkowiak said.

“This shared path provides residents with safe access around the lake’s foreshore and an excellent opportunity for recreational activities,” Cr Symkowiak said.

“Replacing the path to such a high quality was a sound decision of council that will help to reduce maintenance costs into the future,” she said.

The works to replace the former asphalt path were funded as a priority project in council’s 2016/17 budget to the amount of $429,000 and forms a section of the path network within the estate.

The 1.4km path has been reinforced with mesh steel to minimise risk of displacement in the future.

Council entered a team of six in the annual competition and put forward a diverse group of professionals, considered to be emerging leaders within the organisation.

More than 40 years experience in the news media, most of them as editor of local newspapers across the Sydney metro area, but a few years working as a sub-editor with the metros. Lots of awards, both as a reporter and editor, but says he values just as much Community Service Awards from Campbelltown City Council in 2004 and 2016. Took a voluntary redundancy in 2014 from Fairfax Community Newspapers after 21 years there. Loves the digital world, because ''there's no question it's the future''. Eric promises his hard hitting but fair approach won't change when he reports the news via cyber space.
View all posts by Eric Kontos
Online toolkit for local small businesses aiming up
Trial program: youths to be supported away from homelessness