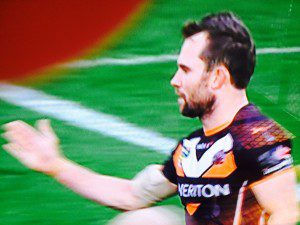 The song in grandma’s time said ‘‘you don’t know what you’ve got till it’s gone’’ and I have to admit that’s how I feel about Braith Anasta now.

For most of the season a posse of Wests Tigers observers have been calling for Anasta’s head, because they felt he wasn’t contributing to the team, and a younger man would have been better in the role of five-eighth.

I was one of these people, and now that the veteran is out injured for the rest of the season and the team is desperate for troops with NRL experience, I have to admit that it feels something like a bit of egg on my face.

Grandma was right: Be careful what you wish for.

But life goes on and with six matches still to play, the Wests Tigers will line up against the Melbourne Storm this Monday night after a week when anything but football was on the minds of the players, especially skipper Robbie Farah, who was busy dismissing claims he was behind moves to dethrone coach Mick Potter.

Farah had every right to be angry, especially after someone in the club deleted his comments at the post match conference supporting the coach when the video was inserted into the club’s website.

The club CEO, Grant Mayer, was reportedly apologetic towards Farah over the video, but this guy seems to be apologising a lot. He also apologised to the people of Campbelltown earlier this year after saying another poor turnout at Campbelltown Sports Stadium may mean no more games here.

In any case, as far as Potter, Farah and the rest of the playing group are concerned, it would not have been an ideal preparation for such a big game, especially after the ordinary show they put on against St George.

The week before, against the Bulldogs, they were superlative, so just maybe it’s a case of one week on, one week off.

But looking at the team named, and amid talk Luke Brooks is unlikely to play because he has a shoulder injury, it does not bode well for Wests’ chances against a fast improving Storm.

Mitchell Moses is at fullback, filling in for James Tedesco, Keith Lulia is deputising for David Nofaluma on the wing, while forward Bodene Thompson is filling in for Chris Lawrence at centre.

Pat Richards is there on the other wing, as he has been most of the year, but I’ll come back to him shortly.

The forwards at least look a bit more settled, so they key there will be hooker Robbie Farah and what sort of mental shape he turns up with on Monday night at Campbelltown. The bench, too, looks solid, so the engine room, if it’s on its game, should be able to match Melbourne in that department.

To me, the key might just be how Pat Richards plays. The winger had a phenomenal return to NRL in the first 10-15 rounds of the competition, had a bit of an injury, and has been not as effective more recently.

Richards really gave the team an X-factor with his spiralling kick-offs, as well as general, accurate kicking. With a bit more service form his centre partners Richards would have been even more effective, but these things do happen.

The Tigers need him back to his kicking best, but also with more ball in his hands to help the forwards when they’re tiring. He’s a big guy and can bring the ball out of the danger zone if need be.

If Richards plays well on Monday night, the Tigers are in with a good chance to grab the vital two premiership points.

And that would be the icing on the cake for Simon Dwyer, the former forward who hasn’t played since injuring a nerve in his arm two years ago.

Part of the proceeds from the night will go to Dwyer, so hopefully a massive crowd will be on hand. Which will also help the Wests’ cause.

It’s going to be tough, but in my footy tipping comp I went for Wests by two points, even though grandma would have commented that if I had any brains I would be dangerous.

More than 40 years experience in the news media, most of them as editor of local newspapers across the Sydney metro area, but a few years working as a sub-editor with the metros. Lots of awards, both as a reporter and editor, but says he values just as much Community Service Awards from Campbelltown City Council in 2004 and 2016. Took a voluntary redundancy in 2014 from Fairfax Community Newspapers after 21 years there. Loves the digital world, because ''there's no question it's the future''. Eric promises his hard hitting but fair approach won't change when he reports the news via cyber space.
View all posts by Eric Kontos
Book Week in Liverpool all about fun and learning
Liverpool mayoral ball hosts to add celebrity appeal