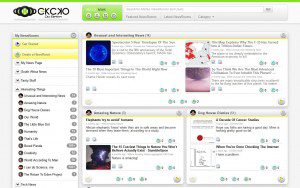 Trying to filter out the news that interests you from the torrent that doesn’t is becoming a serious problem these days.

Monitoring multiple news sites every day takes substantially more time than most of us have available.
Current RSS readers consolidate your news feeds, but still leave you with mountains of information to sift through to find what you want. Many of them have tried to solve this problem but have not succeeded in giving users the control that they need to effectively manage this ever-rising flood of information.
Now there is a new product on the market that could turn this tide. While EKCKO News incorporates a host of powerful features, this useful tool is much more than just an ordinary newsreader.
Using some smart technology, EKCKO monitors thousands of global news feeds and then filters out only those articles that interest you. It does this by delivering only the news that matches the keywords that you have chosen.
It literally takes seconds to create NewsRooms on any topic that you want to follow. You can create as many NewsRooms as you like and EKCKO then fills each one with relevant articles.
Of course, you can stream an entire feed/s into your NewsRoom, as with a traditional newsreader. However, EKCKO gives you the control to stream only the news that you want.
Browsing through all the articles within a particular feed is likely to become a thing of the past.
To further organize your news feeds, you can sort your NewsRooms into customized sections like Sport, Politics, Italian Recipes or Siamese Cats, allowing you to create your own personalized newspaper based around your interests.
NewsRooms set up by other EKCKO users can be added to your news mix at the click of a button and you can even publish your own articles. Just imagine the newspaper you want and you can create it on EKCKO without breaking a sweat.
One of the great features of EKCKO is the ability to easily bookmark and save any webpage that you come across. Whether you’re doing research, compiling information or simply want to save an article to read later, you can add it to your NewsRooms in seconds using a simple browser button.
You can browse through curated content added by other users or simply search the EKCKO database of articles sourced from thousands of news feeds.
This content can then be discussed, in private or public, on EKCKO’s built in discussion platform and easily shared to all the main social media networks.
While EKCKO already has more features than many other newsreaders, a recent comment by co-founder Adrian Miljak hints that this project is only getting started.
“This is just the beginning. We’re building an integrated platform that will put our users in complete control of all their information. More features and functionality are coming soon,” he said.
For more information go to www.ekcko.com

More than 40 years experience in the news media, most of them as editor of local newspapers across the Sydney metro area, but a few years working as a sub-editor with the metros. Lots of awards, both as a reporter and editor, but says he values just as much Community Service Awards from Campbelltown City Council in 2004 and 2016. Took a voluntary redundancy in 2014 from Fairfax Community Newspapers after 21 years there. Loves the digital world, because ''there's no question it's the future''. Eric promises his hard hitting but fair approach won't change when he reports the news via cyber space.
View all posts by Eric Kontos
R.I.P. Kangaroos league legend, Bernie ‘Poppa’ Evans
Mac Square pop up art gallery for HSC works exhibition