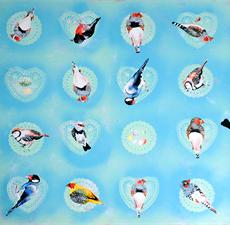 Each year, LAS members are invited to submit works for exhibition in the five gallery spaces at Casula Powerhouse Arts Centre.

The 2014 exhibition promises to include a diverse range of media and subjects, and appeal to all ages and cultural backgrounds.

The inclusive nature of LAS represents the multiple voices and perspectives of the local community, while simultaneously illustrating the significant number of talented artists that are emerging from the region.

Artists featured in LAS will be encouraged to develop their practice and exhibit in future programs at Casula Powerhouse Arts Centre.

This year, LAS will feature a body of works by Gary Smith, the 2013 Annual Liverpool Art Society Exhibition Scholarship Winner.

Casula Powerhouse Arts Centre is committed to encouraging and fostering arts in the Liverpool and South West Sydney region through its visual art program and ”we look forward to continuing the promotion and celebration of local artistic talent with Liverpool Art Society in 2014”, a spokesperson said.

The 17th annual Liverpool Art Society Exhibityion and art award will be formally launched at noon on Saturday, September 13.

The exhibition, which will be free to the public, will be on until October 5.