Samuel Griffiths: On our Mount Rushmore, if we had one.

John Ryan used to be in the NSW parliament  as an MLC and he became famous for, mostly, looking like a character in the Simpsons, the poor, long suffering neighbour of Homer Simpson, Ned Flanders. Me, well, I have always had the utmost respect for Ned, er, sorry, John, so when he posted a picture of High Court judge Samuel Griffiths on Facebook and said: Who is Samuel Griffiths you ask? Well, according to John Ryan, Griffiths should be a household name in Australia. “He is our equivalent of Thomas Jefferson in the United States of America,’’ John Ryan wrote on Facebook. “He wrote the first draft of the Australian Constitution. He created the brilliant combination of the best features of the Westminster system from Britain and the Washington model from America. It’s high time we started celebrating the heroes of our nation. PS: He was pretty keen on the idea of Australia being a republic.’’ Now you’re talking Ned, sorry, John. Seriously, hush hush like, one thing we need to start doing in our great country is recognising some of our real heroes. We’re not talking Mount Rushmore here, not just yet, but goodness me, we’re just too bloody humble. And as for John and his resemblance to Ned Flanders, well, I just looked at a thousand pictures of him on FB and it’s a bloody nightmare. It’s like watching a re-run of the 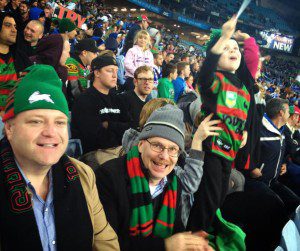 Ned Flanders is a Souths supporter, second from left.

Simpsons that never ends and, worse of all, Flanders is in all of them. Anyway, because mainly it’s footy finals season, I chose the one where Ned Flanders is a Souths supporter, and since the Bunnies will win this year’s comp, I though I’d give myself a bloody exclusive, OK?

One function I won’t be going to this year but wish I was is the Camden Rams Old Boys 2014 Sports Luncheon. Just looking at the poster you know it’s going to be a rip-roaring afternoon on Thursday, September 25 at one of my favourite pubs, Camden Valley Inn (see this week’s Top Five). Jimmy Smith, the former Roosters, Souths and Western Suburbs forward will be the host for the function, but helping him out and telling some great rugby league yarns will be legends of the game, bloody Queenslander Kevin Walters, and Bryan Fletcher, the former Rooster and Rabbitoh. Money raised at Camden Rams Old Boys sports luncheons goes to good causes. In 2012 and 2013 funds raised by Old Boys was used to purchase a new mower, assist in the lighting upgrade and replace the field fencing at Kirkham Oval in addition to assisting some families in the community.

It was nice to get a message from Campbelltown councillor Fred Borg the other day, saying he’d like to catch up to discuss some issues with the Voice, but not this week because he is down at South Durras with his brother, which brought back some memories. Many years ago, Fred and I took a trip down to South Durras, which sounds quite exotic, and it certainly is a nice part of the south coast of NSW. Along for the ride were my son Samuel and another mate of ours, Glenn Henney, and that’s another hairy story. We stayed in Fred’s caravan, and on the second day Fred showed off his other property nearby, a lovely little holiday home. The highlight without a doubt was midnight prawn fishing and boiling the little buggers and washing them down with some cold beers outside Fred’s caravan. Priceless. There were kangaroos everywhere and my little fellow loved it all, so it was nice to hear Freddie still heads down to South Durras for a little break from everything.

Many moons ago, when I was the editor of the Macarthur Advertiser during its golden years, Wayne Cousins was one of my sports reporters. We became friends, etc, and then Wayne moved on to the Wests Tigers, his dream job as their media manager. Anyway, the dream is over now for Couso, he’s back among we mortals and earning a living doing a real job. But what’s funny was how I heard about it. I was at the footy on a Monday night at Campbelltown Stadium for Wests Tigers v Melbourne I think it was and one of the other guests, another old mate, Geoff Corrigan, says, guess who I saw at Camden Valley Inn the other day, Wayne Cousins, he’s working there fulltime. Right. No kidding, on the Wednesday I get a phone call from a business associate who says to me, you wouldn’t believe who I saw at the Camden Valley Inn. Yes I would believe it, I’m thinking. Even my son, Alex, came back from shopping at Macarthur Square and uttered the same bloody words, Dad, you wouldn’t believe who I bumped into. He now works at …yes, Wayne Cousins. By the following Monday, just seven days later, five, maybe six people have uttered the famous words, you wouldn’t believe who I saw at Camden Valley Inn. And then, of course, the South West Voice goes live and one of the messages of support I received was from Mr Cousins hisself, who confirmed what all the other Macarthur village idiots had told me. And that was that, phew! Anyway, it was good to catch up with my old mate, and I hope to have a beer with him before the end of the year.

More than 40 years experience in the news media, most of them as editor of local newspapers across the Sydney metro area, but a few years working as a sub-editor with the metros. Lots of awards, both as a reporter and editor, but says he values just as much Community Service Awards from Campbelltown City Council in 2004 and 2016. Took a voluntary redundancy in 2014 from Fairfax Community Newspapers after 21 years there. Loves the digital world, because ''there's no question it's the future''. Eric promises his hard hitting but fair approach won't change when he reports the news via cyber space.
View all posts by Eric Kontos
Here’s cheers to our pubs
Last call for all our little Miss Princesses