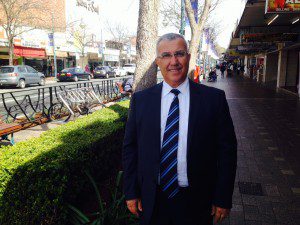 Liverpool councillor Mazhar Hadid is confident he can win the seat of Liverpool for the Liberal Party next March.

The time for making speeches in parliament is over; it’s time for action, says the man the Liberal Party hopes will end the 21 year reign of the State Member for Liverpool.

It’s not mission impossible but it won’t be a walk in the park either when the voters go to the polls in almost exactly six months to choose between the Labor Party man who’s had the job all those years, Paul Lynch, and the man who wants his job, Liverpool Councillor Mazhar Hadid.

To start with, Liverpool is one of the safest seats Labor still holds after the rout of 2011.

But Hadid, who put up a good fight in losing to Lynch at the 2011 state election, is confident that his “man of action’’ record will get him across the line over the MP whose supporters always point to how he has made “so many speeches’’ in parliament.

After six years on Liverpool Council, Cr Hadid says he can point to a stack of achievements secured by a coalition of Liberals like himself and independents such as Peter Harle of the Liverpool Community Independents Team or LCIT.

“There have been 30 years of neglect in Liverpool, so there’s a fair bit of catching up, but we’re getting there,’’ Cr Hadid says.

His list includes the impending arrival of hundreds of state government public service jobs, which will provide a massive boost to the local economy of the Liverpool central business district.

“And we are working for more jobs; it’s what Liverpool needs as its population grows,’’ he says.

“We are also fixing the infrastructure of Liverpool, a university campus of the UWS is on the way for Liverpool, and the council is serious about getting the third major stadium built here.

“We have invested $100,000 in a feasibility study for such a stadium because it is part of the plan we have for Liverpool. It’s why we are lobbying really hard for this.

“We don’t just want to be called a regional city; we want to be one.’’

There’s also plans for more car parking in the CBD, and the reopening to traffic after hours of the Macquarie Mall.

“The reopening is part of our plan for a vibrant nightlife in the CBD, restaurants to be open well into the night, and together with the installation of CCTV would make our city even safer.’’

The way he sees it, if he were the local MP, it would mean he would be a member of the government, assuming it is returned, thus he would be able to deliver to Liverpool even more than he is currently doing along with his council colleagues.

“I would say to the government as one of its MPs: here in Liverpool we must have more public service jobs, and fight until we got those jobs,’’ he says.

One of the criticisms thrown his way over the years is that he is a man for all seasons, having first joined the ALP, then resigned to sign up for a Liberal Party membership.

“Mate, yes, I did join the Labor Party when in the south west it was wall to wall Labor MPs but soon realized it was not the party for me and walked away,’’ he says when asked about it.

When he first came to public life, Cr Hadid was known for his “passionate’’ expression of what he thought Liverpool needed.

In recent years he has curbed the level of enthusiasm, but not the passion he has for the need to help Liverpool reach its potential. And he is far more reflective now about what needs to be done.

“What we need to do is see Liverpool as being a garden of many kinds of flowers, and we should act like the bee, which is very selective when it looks for a flower to drink from. We too should be aware that we need to be careful about what we have to do to make Liverpool even better.’’