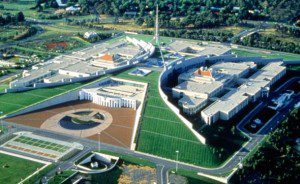 Major parties are way too cynical

There’s nothing wrong with political parties blueing with each other in the eternal fight for our hearts and minds.

So long as it’s done in a peaceful, civilised way, the battle of ideas between Labor and Liberal has generally been good for the country.

I am not sure when this stopped being the case, but if forced to choose I’d have to say sometime after June 24, 2010.

You may remember that date because it was a watershed moment for Australia on a few levels.

I don’t know where you were, but I was lying on a beach in the Mediterranean, when my brother, who had his face buried in a laptop, tapped me and said: Hey, we have a woman prime minister.

I slowly sat up and replied, hey, say that again.

We have a woman prime minister, he said; Julia Gillard’s got rid of Kevin Rudd, here, take the laptop, have a look yourself.

So now you know where you were when that big political earthquake took place.

Well, I think that since that fateful day, slowly but surely there has been a massive change in the way Labor and Liberal politicians and the media conduct themselves and their affairs.

A lot of the old rules of decency and integrity have broken down since 2010 and what we have ended up with is two old political parties becoming utterly ruthless and cynical in seeking the reins of power.

Surely Exhibit A in this argument is Tony Abbott telling one of the independents, Tony Windsor, that he would do anything “but sell my arse’’ to become prime minister.

Exhibit B is Julia Gillard, who did become prime minister only after ditching her promise during the election that “there will be no carbon tax in a government I lead’’.

From the moment the Labor Party formed a minority government it was on for young and old – to the detriment of the people and the country.

In the next three years there was this surreal feeling that the people of Australia had become invisible.

Fast forward to the Abbott government and Joe Hockey’s first Budget, when he was sprung by veteran Channel journo Laurie Oakes dancing in his office to a song called The Best Day of My Life.

His Budget of course was so cruel to so many people, who, had they known the contents may have started gyrating to the sounds of a song called Welcome to My Nightmare.

The Prime Minister this year had his own moment of truth when there was a ballot for his job between himself and an empty chair – and the empty chair got so much support Tony Abbott later called it his “near death experience’’.

But you know what? Nothing’s changed much, not for the PM or the smartarse who wants his job, Bill Shorten.

All they do they do for one reason: politics. Any policy is just a lucky break for the rest of us.

There will be deficits as far as they eye can see but have you read of any government action to reduce spending on politicians expenses such as overseas travel, the limos, all the perks they enjoy?

No? You’re right. Neither have I. It is quite pathetic really.

So, it has come to this then, that as a country we just can’t afford to unconditionally keep supporting one or the other of the major parties.

It’s one of the reasons they now take us for granted; why they think we’re mugs.

Maybe the time is soon coming when we are going to have to send them a strong message that we’re really not that rusted on; that we may consider a better offer.

Like for instance, Richard Di Natale, the new leader of the Greens. He seems to be mainstream in a lot of his views and has already helped the government pass important legislation through the Senate.

It’s early days yet, but if Di Natale turns to be as mainstream as he claims, hell yes, of course I will consider giving him my vote.

But he’d have to remove Sarah Hanson-Young first – you’ve got to draw the line somewhere.

More than 40 years experience in the news media, most of them as editor of local newspapers across the Sydney metro area, but a few years working as a sub-editor with the metros. Lots of awards, both as a reporter and editor, but says he values just as much Community Service Awards from Campbelltown City Council in 2004 and 2016. Took a voluntary redundancy in 2014 from Fairfax Community Newspapers after 21 years there. Loves the digital world, because ''there's no question it's the future''. Eric promises his hard hitting but fair approach won't change when he reports the news via cyber space.
View all posts by Eric Kontos
Clay skulls honour those who passed away
Bonnyrigg host the Sharks in vital clash