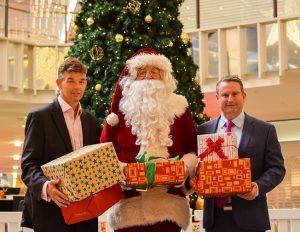 Mr Warren has run the campaign for four years – with the shopping centre supporting the drive on each occasion.

The number of donations this year has far exceeded any expectations Mr Warren had prior to launching the 2018 drive.

Anyone wanting to donate a toy has until Thursday, December 13 to do so.

Toys can be dropped off at Mr Warren’s electoral office, located at shop 3, 72 Queen Street, Campbelltown.

All toys will be donated to Macarthur Gateway, who in turn will pass them on to less fortunate local children.

“The Campbelltown community is famous for its generosity – and this is highlighted every year when I run my toy drive campaign,’’ says Mr Warren.

“Once again this year I have been amazed by the number of gifts donated by thoughtful locals.

“The amount of donations has far exceeded any expectations I had before the drive was launched.

“I thank Macarthur Square centre management for again coming on board and donating an entire shopping trolley worth of gifts.

“The presents will ensure children less fortunate will have something to unwrap on Christmas Day.”