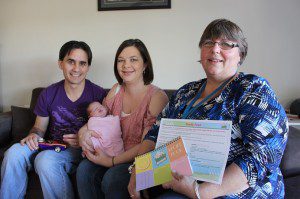 Glen Alpine parents Simone and Phillip Eastgate with community nurse Lynne Ireland who visited their home as part of the program.

A project pioneered by South Western Sydney Local Health District aimed at preventing obesity in children has taken out the 2014 NSW Health award for Preventative Health.

“Australia’s obesity epidemic continues to be one of the major health burdens in society, which has had a direct flow-on effect to our younger generation, with approximately one in five children aged 2-3 years now overweight or obese,” she said.

The early intervention program consisted of eight home visits from specially trained community nurses delivering a staged home-based intervention: one in the antenatal period, and seven at one, three, five, nine, 12, 18 and 24 months after birth.

“Timing of the visits was designed to coincide with early childhood developmental milestones,” Ms Williams said.

“The Healthy Beginnings Trial was undertaken in some of the most socially and economically disadvantaged areas of Sydney where there is a great need for social support.”

The results of the trial found that the mean body mass index for children in the intervention was significantly lower and that 11.2 per cent of the group were overweight or obese, compared with 14.1 per cent of the control group.

“Organisations in the US, UK and China have adapted our health promotion resources as a model for conducting early childhood obesity research, which is great testament to the importance of the trial developed here in South Western Sydney,” she said.

The annual NSW Health Awards were the 16th in the state’s history and continue the focus on delivering innovation right across the health system.

“The NSW Health Awards celebrate the excellence of our nurses, clinicians, population health and allied health professionals, support staff and researchers – but they also shine a light on innovation,” Ms Larkin said.

“These wonderful ideas harness new approaches to ensure high quality, world class health care and enable us to deliver the right care at the right time in the right place.”

You get to choose one country from each continent
South west boom, but don’t forget the elephant in the room