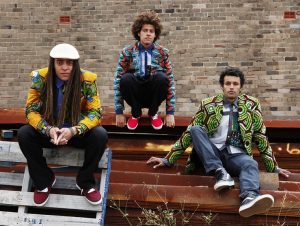 Full circle: True Vibenation are coming back to Campbelltown, where it all started.

When True Vibenation begin a two week residency at Campbelltown Arts Centre next Monday the local band will have come full-circle.

After relocating to Australia from Zimbabwe as children, twin brothers Vuli and Bheki moved to Campbelltown at the age 12.

It was in Campbelltown that they added beat-making, recording, rapping and singing to a musical repertoire that already included horns.

The brothers teamed up with bandmate Gabriel and the trio began a journey that would lead them to share their music with audiences across Australia and eventually the world, including a performance at the Glastonbury Festival in England and tours of Europe and Africa.

The band looks back fondly on their first ever show in the Campbelltown Arts Centre courtyard.

“When you experience your first opportunity it’s impossible to recognise the impact and importance it will have on your career and life,” says Vuli.

“We received a huge amount of support and encouragement from members of the local community and the staff at the arts centre to keep gigging and growing.

“It’s great to have a chance to return to where it all began.’’

True Vibenation will close the residency with a performance on Friday, February 23 in what will be an evening of celebration, showcasing the band’s Afro-flavoured collaboration and their love of tasty beats, big bass, huge brass and infectious dancing.

“It’s important for aspiring young musicians to see what can be achieved through hard work, determination and serious talent.

“To benefit from the experience of these world class, home grown artists is what our contemporary music program is all about.

“Their show offers something for everyone and we can’t wait to share it.”

As part of the residency, True Vibenation will develop new work with fellow young creatives from the African-Australian community.

The collaboration will be documented by award-winning cinematographer, Vanna Seang of Roar Footage who will work alongside the band to create and score a short film.

Easter Show contest: Elderslie High poised for another feather in its cap
Popular doll fair first cab off the rank for Kids of Macarthur