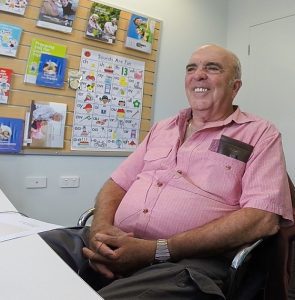 Peter Gohl had struggled with hearing loss for many years as a result of numerous surgeries related to problems in his middle ear.

In 2017 the septuagenarian’s hearing loss had progressed to the point where a hearing aid would no longer be beneficial, particularly in his right ear.

By the end of last year Peter Gohl became the first Australian to receive a revolutionary new cochlear implant.

It has the world’s smallest surgical footprint, which means less time in surgery, minimal scarring and a quicker recovery time for the patient.

“I was interested to know when the Neuro would be available for implantation in Australia as I had enjoyed a high level of benefit from wearing dual Oticon Agil Pro Power hearing aids for several years,” Peter said.

The Neuro is the first cochlear implant from Oticon Medical.

Alongside the smallest surgical footprint in the industry, it offers an ultra compact, award winning implant design, coupled with unique sound processing and wireless capabilities.

It is designed to overcome severe to profound perceptive hearing loss and consists of two parts.

The Neuro Zti is a small implant that is placed under the skin on the bone.

The Neuro One sound processor is the external part that is worn behind the ear. A lead connects it to an antenna that is magnetically attached to the skin.

Tracey King from Oticon Medical Australia said: “We are delighted to announce that the first implantation of Oticon Medical’s Neuro Zti cochlear implant was a great success.

“We are already looking forward to improving the lives of so many more Australians, with a number of surgeries scheduled already this year. This was a wonderful end to an incredibly rewarding year.”

To find out more about Oticon Medical, visit www.oticonmedical.com

New after hours GP clinics opened today in Campbelltown and Liverpool
Footy’s back: another year of hope for rugby league