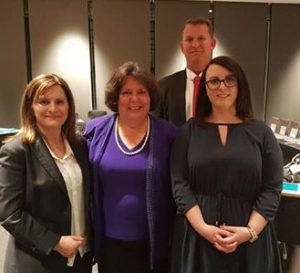 Labor’s Cindy Cagney, left, posted this photo of her team with mayoral candidate Eva Campbell, second from left, Ashleigh Cagney and Paul Farrow, after the election for Camden mayor on Tuesday night.

Cr Cagney said she was disappointed both with the secret vote and the result, which meant that there wasn’t a change back to a policy of community consultation.

Liberal Party councillor Lara Symkowiak was elected mayor for a term of two years. She was mayor for the previous four year term of council.

Despite the secret ballot it’s not hard to work out that Mt Annan butcher Robert Mills sided with the Liberals, who had four councillors elected on September 10, down one from the previous term of council.

There are three Labor councillors and they have publicly stated they supported veteran councillor Eva Campbell for Mayor.

With nine councillors, five is a majority.

Councillor Robert Mills, the popular butcher from Mt Annan, refused to talk with the South West Voice when we dropped in on his shop this afternoon.

We only wanted to ask him one question: has he done a deal which means he will vote with the Liberal Party on every issue?

But a clearly very annoyed Cr Mills grabbed our business card, turned around and stormed off.

Cr Cagney says her side of the chamber had discussions with Cr Mills before the mayoral vote but they came to nothing.

“I am just disappointed for Camden, because I had hoped the two independents [Campbell and Mills] would make sure the council would go back on the road to community consultation.

“As to how Cr Mills votes in the future I don’t know, but I hope that he supports motions that are good policy.

“We have some issues coming up, including the recycling facility, but also there’s a need to have some transparency on the financial position of council, so we’ll see how Cr Mills votes on those.

“For our part, the Labor Party councillors will be abiding by the Local Government Act – we won’t be block voting, even though the Liberals did it for four years.

“What we will do is work hard for the people of Camden.”

More than 40 years experience in the news media, most of them as editor of local newspapers across the Sydney metro area, but a few years working as a sub-editor with the metros. Lots of awards, both as a reporter and editor, but says he values just as much Community Service Awards from Campbelltown City Council in 2004 and 2016. Took a voluntary redundancy in 2014 from Fairfax Community Newspapers after 21 years there. Loves the digital world, because ''there's no question it's the future''. Eric promises his hard hitting but fair approach won't change when he reports the news via cyber space.
View all posts by Eric Kontos
Golfers tee off at Camden with one eye on history
So you think you’re a great grandparent…