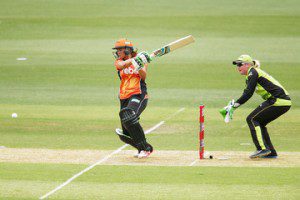 Clare Koski starred for the Ghosts women’s team on the weekend, snaring 7 wickets and hitting 41 runs.

The Campelltown Camden Ghosts first grade cricket team may have been across the harbour cementing a semi final position on Saturday, but thanks to Clare Koski all the excitement was at Raby.

Koski, the Ghosts women’s team allrounder had a blinder in the match against Sydney, both with the ball and the bat.

There was hat-trick in those figures as well, as Koski was simply unstoppable in the sun drenched Raby Sports Complex.

Koski’s heroics helped the Ghosts bundle out the visitors for just 97.

The home side lost just three wickets in getting to 98, but again it was that woman Koski who did all the damage, this time with a bat in her hands.

Koski, who came in at first drop, scored 41 runs, almost half of the runs needed for victory.

On the other side of the metropolitan area, at Chatswood Oval, the Ghosts men’s team were desperate to gain outright victory points.

On day one of the match the previous Saturday, the Ghosts had set up a solid platform, declaring at 402 for the loss of eight wickets.

Star batsman Ryan Gibson with his second consecutive double century and an even 100 from Scott Coyte were the main contributors.

But hard as they tried, the Ghosts could not get the Gordon wickets quickly enough to launch a raid for outright victory.

The home side made 307, with Scott Coyte the most successful bowler for the Ghosts. The former skipper bagged three wickets, all top six bats, but it was to no avail as the Ghosts had to be contend with the first innings points.

They still sit inside the top six in fifth spot, and with just one dayers scheduled in the last round of the home and away competition, it would take a miracle for the Ghosts to miss out in 2015-16.

This Saturday in the final round the Ghosts will once again go northside to Mark Taylor Oval to take on Northern Districts.

And then it will be finals time.