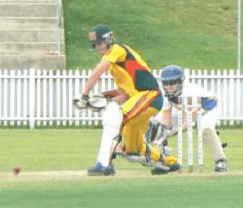 Runs and wickets: Claire Koski scored a century and took three wickets for the Ghosts at Raby on the weekend.

Koski started right where she left off in the Women’s Big Bash League, scoring a stylish 104 as the Ghosts defeated Northern Districts in a 50 over clash at Raby Sports Complex. It was the first century for as Ghosts women’s player in five years.

As if a ton wasn’t enough, Koski swapped keepers gloves for bowling and went on to claim three wickets for 30 runs.

Ryan Gibson batted for 3 ½ hours and faced 179 balls for his 80 runs as the Ghosts fought hard to post a respectable total in the in order to make a very important 80 runs in the Rivalry Round clash with Liverpool at Rosedale Oval.

Ghosts ended up with 207 from 87 overs so the teams will go into the second day on Saturday with the match evenly poised.

After a delayed start due to morning showers, the Ghosts batsmen found the Rosedale outfield damp, slow and challenging.

The normally attacking batting line up only managed to find the boundary on six occasions.

Ghosts captain Josh Clarke said after the conclusion of the day’s play: “To be fair to the Lions, they bowled well and it was a good, tough day of cricket.” 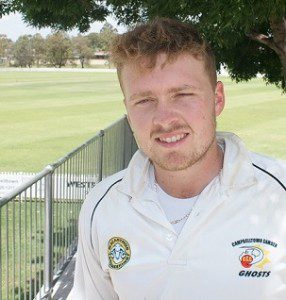 Ryan Gibson scored a valuable 80 runs for Ghosts against Liverpool on Saturday.

• After a delayed start on Raby #1 the Ghosts second grade were sent in to bat only to build a total of 8-293. This was a team effort with three batsmen scoring half centuries and others making useful contributions along the way.

Together with Jarrod Colliss they had added 129 for the third wicket before Lysaught was bowled.

A tidy innings of 60 runs from Tristan Muir laid the platform for youngsters Ryan Smith (23 runs) and Ethan Gillion (32 runs) to carry the score to near 300.

• The third grade affair between the Lions and the Ghosts is currently in the balance.

The Ghosts were dismissed for 183 runs inside 63 overs after being sent in due to the weather conditions.

While the Ghosts scrapped their way to 183 runs in the early afternoon, Wallace Marshall brought them well and truly back into the game in the late session. Marshall took 3/18 to leave the Lions 3/35 at stumps and some work ahead of them next Saturday.

• Home on Raby #2 the Ghosts fourth grade were behind the eight ball from the word go. Batting first they soon found themselves two wickets down for no score and only a gritty effort from skipper Mitch Taylor, who remained undefeated on 50, enabled them to get to a total of 126. The Lions are currently 1-30 in reply.

• At Don Dawson Oval, Cabramatta, the Ghosts fifth grade will be looking to bat on next week after losing time due to inclement weather. At stumps they were 5-116 after Vincent Hreszczuk and Todd O’Keefe had scored 41 and 39 not out respectively.

• On Sunday at Raby, the Ghosts women’s first grade were back to full strength after the return of the WBBL stars for the clash with Northern Districts. While Claire Koski led the way, there were other contributions from the top order as the Ghosts went on to post an imposing total of 7 for 276 from their 50 overs.

Clara Iemma continued her red hot form from the Under 18s national carnival, scoring a hard hitting and unbeaten 68. Lauren Cheatle, fresh from her commitments with the Australian team, opened the bowling with Sydney Thunder player Belinda Vakarewa. Northern Districts were on the back foot from the start and were all out for 144.

Barmaid hurt by flying glass vase: woman charged
My Ideal House to be built in heart of Macarthur