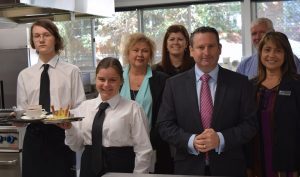 Campbelltown MP Greg Warren is calling on local residents and businesses to put in their nominations for the 2016-17 NSW/ACT Young Achiever Awards.

The Young Achievers Award acknowledges, encourages and promotes the positive achievements of all young people up to 29 years of age in the following categories:

The winner in each category will pocket a $2,500 cash prize with the overall winner taking home $5,000. Nominators also have the opportunity to win, with every nominator going into the draw to win a $200 voucher for any Coffee Club restaurant.

Mr Warren said the awards were a great opportunity to recognise the wealth of local talent in Campbelltown and the broader Macarthur region.

“Campbelltown has so many dedicated young people who are worthy of recognition for the great work they do in our community,’’ Mr Warren said.

“As the local member, every day I see all the different groups and organisations in our community which are run on the back of hard-working young people, more often than not as unpaid volunteers.

“Everyone in Campbelltown knows of a young person in their life who deserves recognition in these awards, so I encourage everyone to get their nominations in.”

Nominations can be made here and are open until Thursday, December 15.

Winners will be announced at a ceremony in March next year.

More than 40 years experience in the news media, most of them as editor of local newspapers across the Sydney metro area, but a few years working as a sub-editor with the metros. Lots of awards, both as a reporter and editor, but says he values just as much Community Service Awards from Campbelltown City Council in 2004 and 2016. Took a voluntary redundancy in 2014 from Fairfax Community Newspapers after 21 years there. Loves the digital world, because ''there's no question it's the future''. Eric promises his hard hitting but fair approach won't change when he reports the news via cyber space.
View all posts by Eric Kontos
Latest health snapshot: smoking down, immunisation up
Camden Arcade celebrates milestone with photographic exhibition