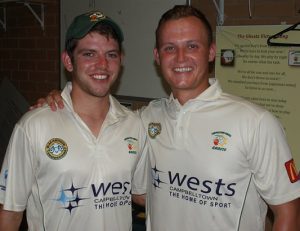 Successful partnership: The Ghosts were guided to their victory of the season by Jack Preddy and Luke Webb

The first win of the season for Camden Campbelltown Ghosts may have been a team effort, but the standout innings by Jack Preddy was the rock it was built on.

The Mosman Whales attack threw everything but the kitchen sink at the number six batsman of the Ghosts but he stood tall until the victory runs were scored, reports JASON ELLSMORE:

Preddy’s innings of 59 not out was compiled in 40 degree temperatures in the middle of a baking Raby Sports Complex on Saturday.

He hit the balls he could, left those he doubted and defended the ones he had to.

Chasing 235 for victory, and with 47 runs still needed, Preddy and the Ghosts were down to their last three wickets.

Preddy was joined by all-rounder Luke Webb for the eighth wicket.

The experienced Mosman bowlers tried to intimidate Webb, hitting him on the helmet, shoulder and torso with good pace.

But he and Preddy survived and managed to scrape the runs required for a famous victory for the local team.

Webb finished 24 not out, while his senior partner, an exhausted Jack Preddy looked for a cool drink as they trundled off the field.

A few minutes later the Ghosts sung the team song so loud it could be heard at Mosman.

An elated Monty Panesar quipped, “I have been here 115 days – it has been a long wait but the boys have been tremendous.”

In the lower grades, Ghosts seconds were defeated by Mosman, a fate also suffered by third grade on Raby 2.

Ghosts fourth grade recorded a comfortable win over Mosman having dismissed them the previous week for 90 runs, while in fifth grade Ghosts avoided an outright loss on Raby 3.

This weekend the Ghosts play Western Suburbs and will host the second and fourth grade fixtures at Raby.

Grim 2016 numbers on cancer, but the fight goes on
Ovarian cancer: women urged to beware of ‘silent’ symptoms