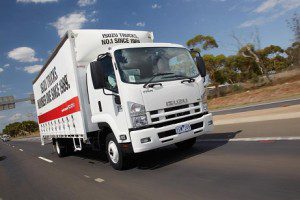 The Isuzu F series has become one of the most popular medium duty truck ranges on the market.

With an impressive 70 models on offer, including single cabs, crew cabs, tippers and 4x4s, the range is well known for its adaptability to almost any Australian application.

Boasting benchmark safety features, car-like comfort and superior driveline across the range, it’s no surprise the recent quarterly winners in Isuzu’s Truck of the Year competition are three businesses which employ the F Series in a variety of different ways.

Over in Western Australia, the Isuzu FRR 600 reigns supreme for West Coast Mobile Pressure Cleaning, which offers high pressure cleaning on everything from domestic pools to farm machinery.

For owner Russell Temple, who operates in the Geraldton and greater WA area, it’s the FRR 600s flexibility and comfortable interior which sets it apart from competitors.

“We travel long distances, sometimes up to six-to-eight hours just to get to a job, so we made sure there was an extra 200 litre fuel tank installed,” Mr Temple said.

“We’ve got a two ton trailer on the back, a 600 kilogram pressure pump permanently installed, and a 200 litre degreaser unit under the back as well. We couldn’t be happier with the truck, and the cruise control and air-conditioning are a blessing on the long trips.”

“This new truck really is our workhorse,” Mr Boesten said.

“It’ll be running around doing everything from deliveries to pick-ups of componentry for our beds. It’s even more comfortable and economical than our last Isuzu.”

The final winner of this quarter is Gold Coast based Goss Bros Refrigerated Transport & Cold Storage, impressing judges with their Isuzu FVL 1400.

Fleet manager Kamal Goss recently added the model to his 16-strong Isuzu fleet, and is delighted with how customisable it is.

“We fitted it with a refrigerated jumbo body with a Thermo King refrigeration unit, capable of minus 30 degrees. It has custom scrolls on the body and Alcoa aluminium wheels, plus our own Goss Bros personalised licence plate,” Mr Goss said.

“We love the reliability of Isuzu trucks.”

More than 40 years experience in the news media, most of them as editor of local newspapers across the Sydney metro area, but a few years working as a sub-editor with the metros. Lots of awards, both as a reporter and editor, but says he values just as much Community Service Awards from Campbelltown City Council in 2004 and 2016. Took a voluntary redundancy in 2014 from Fairfax Community Newspapers after 21 years there. Loves the digital world, because ''there's no question it's the future''. Eric promises his hard hitting but fair approach won't change when he reports the news via cyber space.
View all posts by Eric Kontos
Sport academy night of nights had it all
Politicians: if you can’t stand the heat, get out of the kitchen