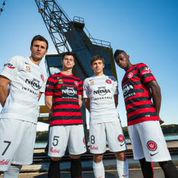 Ready for the challenge: The Wanderers are poised to make history this Wednesday night at Parramatta Stadium.

Arguably the biggest match in the club’s short history, the Wanderers take on not only the reigning champions of the ACL but a club whose stocks have risen significantly over recent years.

Since the arrival of Italian World Cup winning coach Marcello Lippi in May 2012 Evergrande have been almost unstoppable in their domestic competition where they currently sit at the top of the Chinese Super League ladder.

With the Wanderers squad set to introduce new Brazilian signing Vitor Saba to the mix and see Mateo Poljak take his place in the midfield after missing out on the group stages, Wanderers Head Coach Tony Popovic knows the task ahead will be a challenging one.

“On the other hand, that’s something you expect when you’re among the best eight teams in Asia; that you’re going to have to play a great side to get through. It’s a huge challenge but one we are really looking forward to. The club is embracing it and I think our fans will embrace it as well.

“We showed against the Japanese champions that we can handle pressure against a top opponent and this is another one. We expected it to be tough regardless of whom we got. We have got the very best and we want to see how we match up against them.”

The match against Asian Champions, Guangzhou Evergrande will see the first leg played at Parramatta Stadium this Wednesday, August 20, followed by the away leg in China seven days later on August 27.

Guangzhou Evergrande arrive in Sydney tonight ahead of the match on Wednesday night at Parramatta Stadium kicking off at 7.30pm.

Tickets to the match are selling fast. To purchase visit Ticketmaster.

More than 40 years experience in the news media, most of them as editor of local newspapers across the Sydney metro area, but a few years working as a sub-editor with the metros. Lots of awards, both as a reporter and editor, but says he values just as much Community Service Awards from Campbelltown City Council in 2004 and 2016. Took a voluntary redundancy in 2014 from Fairfax Community Newspapers after 21 years there. Loves the digital world, because ''there's no question it's the future''. Eric promises his hard hitting but fair approach won't change when he reports the news via cyber space.
View all posts by Eric Kontos
Camden to take on Picton in Group Six semis shootout
Gutsy Eagles notch another win