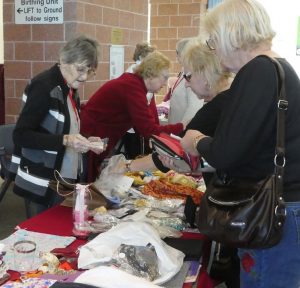 It has taken five years, but Campbelltown Hospital Auxiliary has finally done it.

The auxiliary has won the right to host the 85th NSW United Hospital Auxiliaries State Conference on October 24 and 25.

Campbelltown Hospital Auxiliary, which has raised more than $1.24 million since it was formed in 1953, entered a bid to host the two-day event five years ago.

“We are very thrilled to be hosting the conference – it is a great honour for Campbelltown Hospital Auxiliary,’’ auxiliary president Jan Drayton said.

“Our volunteers have been very busy creating some wonderful table centrepieces showcasing the history of the Macarthur region.

“We are very excited about the event and are looking forward to hearing from other volunteers across NSW about their groups, successes and fund-raising projects.’’

More than 300 people representing 200 hospital auxiliaries are expected to attend the conference, which will be held in Bankstown Sports Club.

It will be held there because Bankstown Sports Club is the Sydney metropolitan area venue for state conferences every two years.

More than 20 members from Campbelltown Hospital Auxiliary will be attending the two day conference.

A video supplied by Campbelltown Council and a power point presentation will be part of the program.

Ms Drayton said the Campbelltown auxiliary raised between $2,000 to $4,000 a month through its baby boutiques, market days and barbecues.

“We encourage members of the community to join us in helping raise money for our hospital,’’ Ms Drayton said.

“There are a many ways people can help and get involved ranging from attending our monthly meetings, helping at our market days and making items for the baby boutiques.

“We have some very talented craftspeople and knitters and we always welcome more help.’’

The auxiliary meets at Campbelltown Hospital at 1pm on the third Monday of the month.

If you happen to be visiting the hospital tomorrow around lunch time, auxiliary members will be cooking up a sausage sizzle in the foyer of the hospital, so go up and say hello.

For more information email the auxiliary at campbelltownhospitalauxiliary@gmail.com