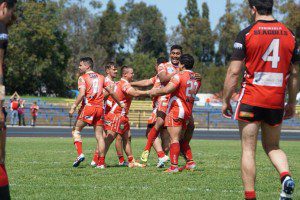 The Eagles celebrate their win on Saturday, which has put them in the 2014 decider against Mounties next Sunday, September 28

The East Campbelltown Eagles will play Mounties in the 2014 NSW Rugby League Sydney Shield grand final at Allianz Stadium next Sunday, September 28, from 10.30am.

Eagles signed up for the 2014 Sydney Shield competition after their controversial exit from the Group Six competition last year.

A grand final appearance in their first year is a massive achievement and a testament to the spirit within the club.

On Saturday, Peninsula started like a house on fire with two quick tries in the opening 10 minutes to race to a 10-nil lead.

But Eagles kept their composure, completing their sets and being solid in attack. They were rewarded with their first four pointer to Cruise Iosepha when Wayde Dunley put in a kick across field and Cruise picked up the loose ball.

When Philpo Sauvao tore a PCL and was down injured Peninsula ran in their third try next to the uprights to extend the lead to 16-6 at the 20 minute mark.

The Eagles responded by piling on the pressure, which ultimately set the platform for the rest of the game.

Peninsula withstood a barrage of attack to take the game to the break still enjoying a 16-6 advantage.

The Eagles came out firing in the second stanza, and in the first set of six Wayde Dunley nailed a 40/20 kick that saw the Eagles score from the next set of six when Sean Connor picked up a grubbing kick under the post.

Connor converted his own try for the Eagles to narrow the gap at 16-12 and the Eagles forwards started to make huge inroads and again Peninsula was under pressure defending their line in the next few minutes.

Sam Hoare dummied near the line and then went over under the post, Connor again converted and Eagles had hit the lead 18-16.

Peninsula then took a chance on the last play going down the short side to score in the corner and regain the  lead at 20-18.

Eagles resumed its pressure plan and the result was big Jacob Nansen crashing over for a try for the Eagles; Connor’s conversion put the Eagles ahead at 24-20 with 15 minutes remaining.

When the Eagles received a penalty they extended their lead to six points after a successful kick from Connor.

When Wayde Dunley nailed a field goal from 38 metres to extend the lead to 27-20 with just seven minutes remaining, the brutal Eagles defence closed out the game for a stunning 27-20 victory and a historic place in Sunday’s grand final against Mounties.

*The East Campbelltown Eagles RLFC is organizing a supporter’s bus that will leave The Bradbury at 8.45am on Sunday morning; the cost will be $25 and that includes entry into the ground; for bookings please phone Tammy on 0425 335 345.