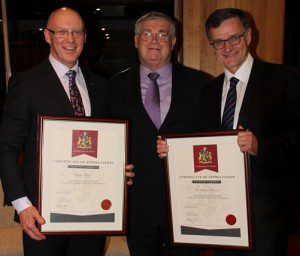 It’s almost as rare as hen’s teeth to see two politicians from the opposite side of the fence come together for anything, let alone a photo opportunity while receiving a framed Certificate of Appreciation from the council.

But that was the case when Campbelltown Council held a reception for former MPs Doctor Andrew McDonald, (Labor) and Bryan Doyle (Liberal) a couple of weeks ago.

And when the mayor, Paul Lake, praised the efforts of the former Members for Macquarie Fields  and Campbelltown respectively, you almost start to believe there’s hope for our politicians yet:

“Bryan Doyle and Dr Andrew McDonald were highly-respected representatives who achieved many great things for our city during their terms of office,” Cr Lake said.

“Both men served our area honourably and with passion, advocating for improvements to our city and ensuring Campbelltown was on top of the Government’s agenda.’’

More than 40 years experience in the news media, most of them as editor of local newspapers across the Sydney metro area, but a few years working as a sub-editor with the metros. Lots of awards, both as a reporter and editor, but says he values just as much Community Service Awards from Campbelltown City Council in 2004 and 2016. Took a voluntary redundancy in 2014 from Fairfax Community Newspapers after 21 years there. Loves the digital world, because ''there's no question it's the future''. Eric promises his hard hitting but fair approach won't change when he reports the news via cyber space.
View all posts by Eric Kontos
Soccer clubs celebrate their heritage
Heroes of Liverpool to be celebrated

One Response to Hear ye of little faith in politicians