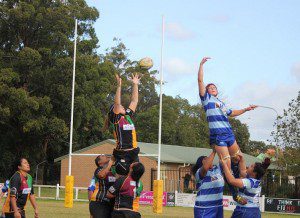 Hard work pays off: Harlequins women’s team has recorded its first ever victory.

They have finally done it! After some close calls over the past couple of matches the Campbelltown Harlequins Fernwood women’s rugby team have registered their first win of the season.

In a close tussle the Quins prevailed over a tough Waverly side to win their first ever match 10-5.

Atasi Lafai continued her great form with another try following on from a hat trick the previous week. Royce Wilkinson had a great game with some great carries getting the team over the advantage line.

And  school girl Jemima Henry continues to show rapid improvement with some tenacious defence and strong ball carries against Waverly.

Coach Sene Auelua was happy with the result having worked tirelessly on improving the skills of the players and their game understanding over the past couple of months.

The task doesn’t get any easier for the Harlequins when they take on the top ranked Parramatta team away in their next game.

• Any ladies interested in playing please call 0404 829 356 or email campbelltownharlequins@gmail.com

♦ On the weekend the Harlequins grade teams were away to Wollongong Vikings. Under grey skies and showers the club had another disappointing outing with only the third grade making the cut.

A superior defensive effort saw Harlequins thirds win in a close encounter 8 – 5. The win moves the third grade to within 4 points of the top four. A bonus point win next week against fourth placed Shamrocks will see the Harlequins thirds well and truly in contention for the finals. The lone try went to Noa Raura, with a penalty kicked by Lucas MacDonald. Shiloh Aupouri was awarded man of the match.

• In second grade the Quins slipped out of the top four after a disappointing performance against a much stronger Vikings side. The home side ran in 6 tries to 3 in their 48-17 win over Quins. Tries went to Sam Meafua, Parlot Seiuli and replacement Daniel  Leaufagatele. Nathan Carney was named man of the match.

• The run of horror injuries continued for the Harlequins first grade when five eighth Ian Flaxman suffered a fractured eye socket and broken nose in a tough encounter with the Vikings. Ian joins centre Gregory Dunn on the side line for at least five weeks.

• The Colts were due to travel to Uni to take on the competition leaders on Saturday, however, the inclement weather in the lead up to the match forced a postponement.

Harlequins will host Shamrocks at home this coming Saturday, July 25.