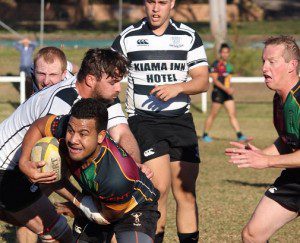 Harlequins tried hard but lack of discipline let them down against Kiama on Saturday.

The Campbelltown Harlequins hosted the Kiama Cows on Saturday in round seven of the Illawarra Rugby competition with mixed results.

The Kiama club only field a first and second grade sides so the Harlequin third grade played the Harlequin Colts in a Challenge Cup match to kick off proceedings for the day at Campbelltown Showground.

For a second week in a row the Harlequin first grade side struggled to compete and ended up with a demoralising 50-0 defeat to a rampant Kiama Cows side.

Kiama’s big forwards ran riot in the first half as the visitors barged over for five tries.

After showing a lack of discipline in the first stanza, the Harlequins managed to regain some composure in the second half and came out with better structure.

However, a red card and two yellows left the side with only thirteen on the field.

Kiama took advantage of the numbers to run in another three tries in the last 12 minutes against a tiring home side defence.

Second rower Ashley Hanthorn was Harlequins’ best on the day with strong games from hooker Vuna Lama and half Mitch Gordon. 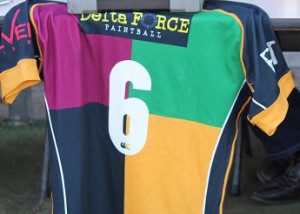 In a mark of respect for the passing of former All Black Jerry Collins during the week, the Harlequin first grade number 6 jumper was retired for the match against the Kiama Cows. Pictures: Rubie Crofts

♦ Next week the Harlequins are away to Shoalhaven.

Harlequin seconds have moved into third on the competition ladder with a strong effort against Kiama.

Both wingers crossed for tries, underlying the expansive nature of the match.

Number 14 Evile Evile bagged a hat trick while number 11 Gregor O’Mara scored the last of the four tries for the home side.

Prop Rick Flaxman managed one conversion and a penalty to take the score to 25-7 in favour of the Quinnies.

Halfback Villi Onesi was awarded man of the match.

♦ Due to a representative weekend the Harlequin women’s rugby side did not play this weekend.

The team will be at home to Warringah this Saturday.

Any women interested in playing please call 0404 829 356 or email campbelltownharlequins@gmail.com.