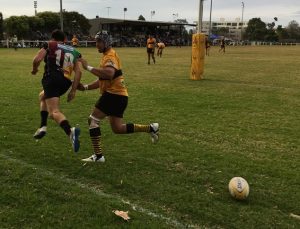 Try! Campbelltown score almost under the posts to grab the lead over Camden.

Scintillating rugby was served up to a packed house at Campbelltown Showground where the Campbelltown Harlequins and Camden Rams battled it out in the local derby.

The traditional “Back to Campbelltown’’ match up is always a fiery affair and the first half in today’s clash was no exception.

Big hits, great defence and beautifully executed tries sum up the first 40 minutes in the Illawarra Rugby Premierhsip match, which kicked off at 3pm.

Camden had the upper hand early to lead 7-3 with about 10 minutes before the half time break.

After several exchanges which resulted in several turnovers from both teams, Campbelltown composed its attack and were able to score two quick tries.

Both were converted to give the home team a 17-7 advantage – same as the one held by Scotland over the Wallabies in the Test, as the announcer told the crowd, while the players headed to the dressing rooms at the Showground.

Campbelltown went on with it in the second half, even though Camden Rams started the game in the second stanza full of energy and fight.

But the home side were ready for the onslaught and went on to win the match and bragging rights after scoring a second half try to go to a 24-7 unassailable lead. 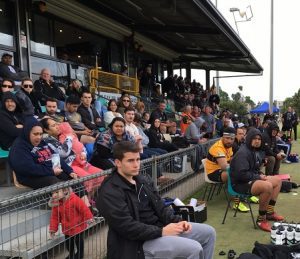 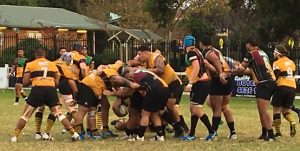 The second half is under way with Harlequins leading 17-7.

More than 40 years experience in the news media, most of them as editor of local newspapers across the Sydney metro area, but a few years working as a sub-editor with the metros. Lots of awards, both as a reporter and editor, but says he values just as much Community Service Awards from Campbelltown City Council in 2004 and 2016. Took a voluntary redundancy in 2014 from Fairfax Community Newspapers after 21 years there. Loves the digital world, because ''there's no question it's the future''. Eric promises his hard hitting but fair approach won't change when he reports the news via cyber space.
View all posts by Eric Kontos
Filipino community celebrate independence with flag raising ceremony
Teenage boy in hospital with head injuries after falling off bonnet