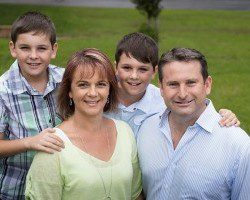 I will listen to you for the next four years: newly elected Campbelltown MP Greg Warren with his family.

The new member for Campbelltown, Greg Warren, has declared he will spend the next four years listening to you.

After comfortably defeating the one term Liberal MP Bryan Doyle in yesterday’s NSW election, Mr Warren told the South West Voice he would be working very hard during his term to make sure he knew the concerns of the people of Campbelltown.

“I am very humbled by the support I have received form the families of Campbelltown,’’ Mr Warren said this morning.

“This is a true privilege, to be their representative in parliament but with privilege comes the responsibility to do the right thing,’’ Mr Warren said.

“We came to this election with a focus on a lot of local issues such as funding cuts to TAFE colleges and health, the need for infrastructure and the cost of living.

“I promise the people of Campbelltown who have entrusted me with their support that I will continue to fight for them over those issues in the next four years.

“I will be doing this by listening to the people of this area to make sure I know what their needs are.

“I will talk to principals but also to the P&C, the parents, to find out what’s needed in our schools.

“I will be out and about at community events, at network functions for business groups, and I will be there not to talk but to listen to everyone about their concerns.’’

Mr Warren also paid tribute to his vanquished rival, Bryan Doyle, thanking him for his four years of service to the people of Campbelltown.

“I wish him and his family well,’’ Mr Warren said.

Greg Warren will be one of two new MPs elected in south west Sydney seats.

The second is also a Labor man, the Campbelltown councillor Anoulack Chanthivong, who easily defeated the Liberal Party’s Pat Farmer to claim the seat of Macquarie Fields.

Cr Chanthivong could not be contacted for comment this morning.

At the close of counting last night and with about 60 percent of all votes counted, Liverpool re-elected Labor’s veteran MP Paul Lynch with an increased majority.

In the other Liverpool based seat, Holsworthy, the Liberal Party’s Melanie Gibbons, who held Menai in the previous parliament, easily beat Labor’s Charisma Kaliyanda.

So now it’s an even split in the south west, with three Liberal and three Labor MPs.

More than 40 years experience in the news media, most of them as editor of local newspapers across the Sydney metro area, but a few years working as a sub-editor with the metros. Lots of awards, both as a reporter and editor, but says he values just as much Community Service Awards from Campbelltown City Council in 2004 and 2016. Took a voluntary redundancy in 2014 from Fairfax Community Newspapers after 21 years there. Loves the digital world, because ''there's no question it's the future''. Eric promises his hard hitting but fair approach won't change when he reports the news via cyber space.
View all posts by Eric Kontos
Doyle looks gone as Labor returns in Campbelltown
Appin put bite on Roosters