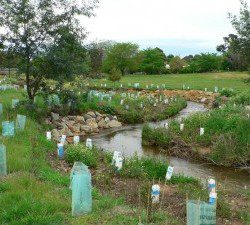 Green Army projects are on the way across Australia.

The Green Army is looking for enthusiastic 17-24 year olds in the Camden area to join what will become the largest-ever team of young Australians supporting environmental action across the country.

The second round of Green Army projects are set to get under way in the coming weeks and young people who want to gain valuable skills, training and experience in environmental and heritage conservation fields are encouraged to register their interest.

Green Army projects to be rolled out soon in Camden include stage one of Camden remnant vegetation – enhancing habitat of national significance.

“Participants will receive a Green Army allowance for the duration of their project,’’ Mr Matheson said.

“They will also be supported to obtain certificate I or II qualifications or nationally endorsed skills set to help them prepare for the workforce or improve their career opportunities.”

Participation is open to a diverse range of young people, including indigenous Australians, school leavers, gap year students, graduates and job seekers. Participants must be aged between 17 and 24 years and an Australian citizen or permanent resident.

Mr Matheson says the Green Army was a key Coalition 2013 election commitment, and with $525 million budgeted over four years, the Green Army is one of the Government’s major environmental initiatives and will encourage practical, grassroots action to support local environment and heritage conservation projects across Australia, providing training to 15,000 young Australians by 2018.

Young Australians interested in joining the Green Army can apply through the appointed Service Providers for each state and territory.

Contact details for Service Providers are available from www.environment.gov.au/green-army.

More than 40 years experience in the news media, most of them as editor of local newspapers across the Sydney metro area, but a few years working as a sub-editor with the metros. Lots of awards, both as a reporter and editor, but says he values just as much Community Service Awards from Campbelltown City Council in 2004 and 2016. Took a voluntary redundancy in 2014 from Fairfax Community Newspapers after 21 years there. Loves the digital world, because ''there's no question it's the future''. Eric promises his hard hitting but fair approach won't change when he reports the news via cyber space.
View all posts by Eric Kontos
Harlequins return from Bowral with perfect score
Galloway out, Seumanufagai in for Wests Tigers