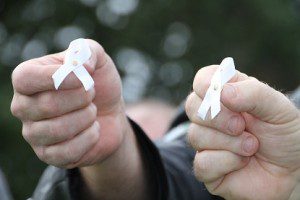 Governments may dither over domestic violence but some men in Campbelltown are working hard to tackle this issue at the local level.

As part of their activities, a recently formed group will hold a White Ribbon Night on Thursday, July 30.

The aim of the event will be to get other local men to join the campaign as well as to again highlight the seriousness of domestic violence.

There will be guest speakers, performances and a photo exhibition as part of the night, which will be held in 4 Surrey Street, Minto, a short walk from the railway station.

The group say the ultimate aim of the campaign is to bring about an end to violence against women.

The group, which has recently been formed out of a branch of the Campbelltown Domestic Violence Committee, said it needed more members to help drive the awareness campaign now and in the lead up to White Ribbon Day, which is celebrated nationally on November 25.

Mayor of Campbelltown, Councillor Paul Lake, is another local who has rallied behind the cause.

“The White Ribbon campaign is about recognising the positive role that men play in preventing physical and psychological violence against women,’’ he says.

“The violence perpetrated by men against women must stop, and it is up to men to stop it,” he said.

“Alarmingly, over the course of a year, one woman is killed every week as a result of intimate partner violence in Australia and the victims are not merely statistics – they are wives, sisters, mothers, daughters and friends.

“Good men cannot – and will not – sit on the sidelines while those they love are at risk of harm.

“I encourage men from throughout Campbelltown to join the White Ribbon group and help to challenge the attitudes and behaviours of a minority of men who use or condone violence against women.

“It will be through support from men in the community that this group will be able to work towards stopping violence against women so that all women can live in safety, free from violence and abuse.’’

The White Ribbon group wants to inspire men to be a part of the social change through a range of measures involving education, awareness raising, preventative programs and partnerships with the local community.

White Ribbon began in Australia in 2003 as part of UNIFEM (now UN Women), and formally became a Foundation in 2007.

White Ribbon Australia observes the annual International Day of the Elimination of Violence against Women, also known as White Ribbon Day on November 25.

White Ribbon Day signals the start of the 16 Days of Activism to Stop Violence against Women, which ends on Human Rights Day (December 10).

More than 40 years experience in the news media, most of them as editor of local newspapers across the Sydney metro area, but a few years working as a sub-editor with the metros. Lots of awards, both as a reporter and editor, but says he values just as much Community Service Awards from Campbelltown City Council in 2004 and 2016. Took a voluntary redundancy in 2014 from Fairfax Community Newspapers after 21 years there. Loves the digital world, because ''there's no question it's the future''. Eric promises his hard hitting but fair approach won't change when he reports the news via cyber space.
View all posts by Eric Kontos
Record effort: Wally’s 500 games for Harlequins
Smart move on emergency app