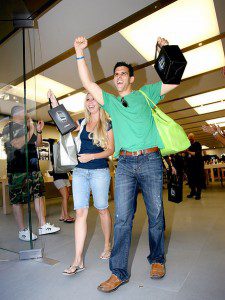 Improvements to the wince inducing ‘Metro’ interface and boosts to multitasking capability were expected nuts and bolts improvements.

The drum-roll moment came with the announcement that the current Windows 8 would be followed not by version 9, but the much more glamorous and attention grabbing version 10!

It would seem Microsoft wants to distance itself from the much maligned Windows 8, and skipping a digit helps with creating an aura of not just a new edition of Windows. But an exceedingly new edition! Excitement!

This all raises an interesting point of the tech era in which we now live.

Going are the times when we see tech emphasised with bullet points of various under the hood software and hardware goings on.

Windows XP, now with full 32 bit memory access doesn’t induce even the slightest adrenaline rush (and it once did with this particular writer!)

Do most tech consumers really care if their new phone includes a quad-core processor? I suspect not. Those smooth lines are more mesmerizing.

This all might sound a bit cynical. We older techies loved our arcane numbers and updates. Windows 3.11 and its improved TrueType fonts was a big hit back in the day.

Yet tech’s selling points had to move on, to fulfil its grand promise. Even in its early “geek only’’ days, digital technology offered a glimpse into a connected world where society at large would gain access to information in new ways that would change our lives in a profound way.

And we have certainly arrived at that. Try to explain to kids a time existed before the tablet and phone fuelled “everywhere’’ Internet. A look of bewilderment and horror is sure to follow.

I do love living in a world where I can immediately answer the question of how big is a T-Rex’s tooth!

This revolutionary upscaling of tech into our lives has certainly at times become attached with a bizarre marketing trail – the line of people queuing for days on end for new iPhones, headline news when they are dropped in public and so forth.

And a warning that last video link of the iPhone dropping disturbs the shiny new phone feeling in all of us! The crazy comes with the greatness.

Tech is no longer just about itself. It’s now part of our daily human experience in a way that those old TV  in the future TV shows such as Beyond 2000 always said it would be.

More than 40 years experience in the news media, most of them as editor of local newspapers across the Sydney metro area, but a few years working as a sub-editor with the metros. Lots of awards, both as a reporter and editor, but says he values just as much Community Service Awards from Campbelltown City Council in 2004 and 2016. Took a voluntary redundancy in 2014 from Fairfax Community Newspapers after 21 years there. Loves the digital world, because ''there's no question it's the future''. Eric promises his hard hitting but fair approach won't change when he reports the news via cyber space.
View all posts by Eric Kontos
Lions convention held in food and culture epicentre
A very Merry Christmas for Campbelltown Council staff