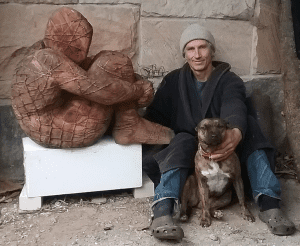 Mr Beggs said Landcom had been a proud sponsor of the awards since 2006, and it was an important way to strengthen ties between the two organisations and give something back to the community.

“Landcom has a proud history of creating new neighbourhoods in cities such as Campbelltown, where we have had a presence since our inception as the Land Commission of NSW in 1975,” Mr Beggs said.

“One of Landcom’s current projects is Macarthur Heights, developed in partnership with Western Sydney University and launched in 2014.

Mr Beggs said artists provided a valuable contribution to society and public art was a great way to bring the community together.

“Landcom has recognised the importance of public art by including works in our various housing developments to make public spaces more engaging, inviting and vibrant,” Mr Beggs said.

“Some of the previous award-winning sculptures from this event are located in Landcom developments, and Landcom is proud to continue to support artists with the $5,000 People’s Choice Award.”

Mr Purdy said he was thrilled to receive the Landcom People’s Choice Award in a year when there were so many excellent entries. 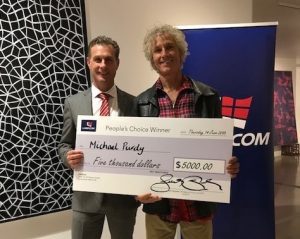 He said his winning work, Gimme Shelter, was a statement on the plight of refugees and the sculpture’s positioning on a rock in a lake separating the viewer from this human figure highlighted the isolation and rejection many stateless people feel.

“Figurative works in general tend to connect well with the public, but l think in this case, the positioning of the wooden man on his tiny barren island was a large factor in the success of the sculpture and its resulting popularity,” Mr Purdy said.

“While the surface detail of the timber is what l like most about the sculpture, the metre or two of water separating it from the viewer was integral to the emotional response that it generated.

“The scarred, faceless figure, sitting rejected and forlorn, was obviously meant to evoke compassion, but equally to remind us all of how lucky we are to enjoy all the freedoms we do in Australia.”

There were 23 works exhibited in the 8th Biennial Western Sydney University sculpture award and exhibition at the Campbelltown Campus from May 4 to June 4.

The 9th biennial Western Sydney University Sculpture Award and Exhibition will be held in 2020.

More than 40 years experience in the news media, most of them as editor of local newspapers across the Sydney metro area, but a few years working as a sub-editor with the metros. Lots of awards, both as a reporter and editor, but says he values just as much Community Service Awards from Campbelltown City Council in 2004 and 2016. Took a voluntary redundancy in 2014 from Fairfax Community Newspapers after 21 years there. Loves the digital world, because ''there's no question it's the future''. Eric promises his hard hitting but fair approach won't change when he reports the news via cyber space.
View all posts by Eric Kontos
How having a digital medical file can ease the pressure
New Hurlstone at Hawkesbury makes $6 billion schools list