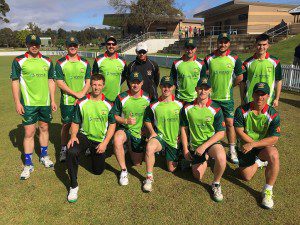 Macarthur’s senior cricket club, the Campbelltown Camden Ghosts, have made the finals in two grades this season. Both will be playing in semis this weekend.

All Macarthur cricket fans are being called upon to support our local club the Campbelltown Camden Ghosts this weekend.

For the first time in 10 years, the Ghosts have made the finals of the first grade competition, the Belvidere Cup.

The Ghosts actually have two mens’ teams that have qualified for the Sydney Cricket Association’s finals series, with fifth grade also lining up this weekend at home, Raby Sports Complex.

First grade will play Penrith at Howell Oval this Saturday and Sunday, with a 10am start on both days.

The Ghosts will be led by Josh Clarke, whose squad definitely has the ability to go all the way.

The talented squad have worked hard for this opportunity since preseason training started back in July, 2015.

First drop Ryan Gibson and allrounder Scott Coyte will need to fire if the Ghosts are to progress.

The Ghosts are yet to play Penrith in this form of cricket in season 2015-16; an abandoned match in the T/20 competition being their only exposure to their finals opponent.

As a result there is no form guide for this match – it is anyone’s game and Ghosts supporters are urged to attend in numbers to nullify Penrith’s home ground advantage.

This is the third time in the 31 years of its existence that the Ghosts have ventured this deep into the summer despite the club’s record of high achieving players and strong first XI teams.

The Ghosts fifth grade were minor premiers for this season and will now play sixth placed Sutherland at Raby#1 this Saturday and Sunday.

The young Ghosts team have an outstanding record for this season, winning 10 out of 15 games (two outright), three draws and two losses.

And when it comes to their semi final opponents, fifth grade is in the same boat as Ghosts first grade: they have not played their opponents in this longer format of the game.

However, in a mid-season limited over affair they recorded a convincing win over Sutherland.

The Ghosts fifth grade captain Michael Strong will lead a team of talented young men into this finals series.