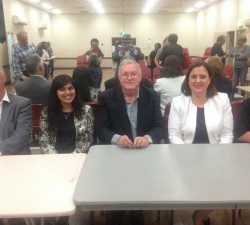 Let’s reflect on the forum: candidates (from left) Michael Byrne, Charisma Kaliyanda, John Anderson, Melanie Gibbons and Signe Westerberg relax at the end of the night.

Most of those local residents who attended last night’s intermodal forum at Wattle Grove agreed on one thing: there should be more public debates like it.

It may not have had the hype of another gathering across town or the backing of a giant media corporation, but it did have mature debate and four candidates for the seat of Holsworthy honestly answering some serious questions from residents.

John Anderson and the Residents Against Intermodal Development (RAID) in Moorebank action group organised the forum, and while the turnout wasn’t as big as they may have hoped, it was a healthy attendance in the Wattle Grove community centre nonetheless.

All four major candidates attended the forum, which went beyond the intermodal, with the next biggest issue of interest being poles and wires.

Sitting MP Melanie Gibbons, Labor’s young candidate Charisma Kaliyanda, East Ward Progress Association stalwart Michael Byrne and the Greens’ Signe Westerberg were all given 10 minutes to state their position on the intermodal and other issues before facing questions from the floor.

As expected, all candidates were opposed to the siting of the intermodal at Moorebank, with Ms Gibbons saying she would continue to strongly fight the proposal inside the government if she and the Baird administration were returned after this Saturday’s election.

Ms Kaliyanda argued that the Liberal MP had spoken about the intermodal in parliament on only a few occasions, but Ms Gibbons retorted that was not how an MP had influence over her party.

Ms Westerberg said the Greens had been the only ones to be totally opposed to the intermodal “from day one’’.

Mr Byrne said only he, if elected, would be able to stand up for the local people because he wasn’t tied to any of the major parties.

“Just give me a chance,’’ Mr Byrne said.

As expected, candidates were asked about the intermodal, poles and wires, roads and transport and other issues.

Mr Anderson, the president of RAID, said the forum had been a success.

“Maybe we could have had a few more people here, but the ones who came got good value from the four candidates,’’ he said.

⊗ The author was the moderator at the forum.

More than 40 years experience in the news media, most of them as editor of local newspapers across the Sydney metro area, but a few years working as a sub-editor with the metros. Lots of awards, both as a reporter and editor, but says he values just as much Community Service Awards from Campbelltown City Council in 2004 and 2016. Took a voluntary redundancy in 2014 from Fairfax Community Newspapers after 21 years there. Loves the digital world, because ''there's no question it's the future''. Eric promises his hard hitting but fair approach won't change when he reports the news via cyber space.
View all posts by Eric Kontos
Five reasons to vote for me: Greg Warren
Sweets: keep it under control this Easter