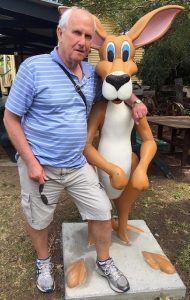 Could the whispers we hear be true and the former mayor Paul Hawker is seriously considering a comeback?

What we hear is that he may not be putting a team together for the next council elections in three years’ time but he is thinking about it.

But the man himself is on Facebook from time to time saying how he is enjoying “retirement’’.

Hawker was the first Liberal Party mayor in more than 40 years and was quite popular during the 12 months he wore the Campbelltown mayoral chains.

He was going to run again, but when the local branch of the Liberal Party didn’t support his plans to run a talented team with a dash of youth, Hawker decided there was no point and stepped down.

Now that he’s on the outside looking in, he probably feels he could still contribute something.

We would have loved to hear what the man himself really thinks but apparently he was too busy getting ready to go on a motoring holiday with his better half, wife Sigrid.

Bon voyage, Paul, but give us a call when you return.

Posted on Facebook: Paul Hawker with a new friend in Hervey Bay.

♦ But it’s not just outside the tent that there is some frustration with the snail’s pace of development in Campbelltown.

Two senior councillors called in recent days to vent about what they believe is inertia and wrong priorities.

They were not pointing the finger at anybody in particular, but their frustration was obvious.

♦ Intermodal opponents are celebrating a couple of small victories but they are not getting ahead of themselves.

RAID chairman John Anderson says the group is really happy that Liverpool council has come to the party to fund their legal fight against the intermodal.

Next week they will get a chance to put their case to state opposition leader Luke Foley.

And their legal action returns to the court later this month for a three day hearing.

♦ In what can only be described as the perfect fit, Coutts Solicitors & Conveyancers, the local all female law firm based out of Narellan, will be the major sponsors of the women’s teams of the Campbelltown Camden Ghosts cricket club this summer.

In more good news for the Ghosts, the club were able to retain both their Australian women’s internationals for the coming season with Lauren Cheatle and Belinda Vakarewa signing on for another year.

During the winter break the Ghosts also announced that they had handed the reins of the club to former NSW Premier Morris Iemma and Camden MP Chris Patterson.

Either way it’s poised to be an interesting year at our top cricket club.

♦ Campbelltown’s HJ Daley Library is celebrating NSW History Week until September 10 with a display highlighting our city’s popular pastimes over the decades.

Campbelltown: Remembering our pop culture is a visual illustration of the changing face of popular culture – from debuts and roller rinks, to discos and skate parks. If you’d like to know more click here.

♦ The first people to go over and say hello to TV personality Tracey Spicer after her talk in Campbelltown Library last week were the parents of another small screen presenter, Channel 7 reporter Sean Berry.

Geoff and Nina Berry were among almost 70 people who attended Spicer’s interesting talk on her first book and some behind the scenes stories about her life as a female journalist on TV.

It may be many years before they are eligible to vote, but a local pollie still enjoyed reading to a group of kindergarten kids to mark the end of Book Week 2017.

Campbelltown MP Greg Warren last week joined kindergarten students at Rosemeadow Public School for a reading of Piranhas Don’t Eat Bananas  by Aaron Blabey. Mr Warren, pictured below with the voters of the distant future,  said he was delighted to support the initiative. 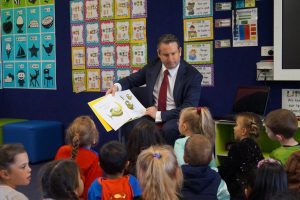 More than 40 years experience in the news media, most of them as editor of local newspapers across the Sydney metro area, but a few years working as a sub-editor with the metros. Lots of awards, both as a reporter and editor, but says he values just as much Community Service Awards from Campbelltown City Council in 2004 and 2016. Took a voluntary redundancy in 2014 from Fairfax Community Newspapers after 21 years there. Loves the digital world, because ''there's no question it's the future''. Eric promises his hard hitting but fair approach won't change when he reports the news via cyber space.
View all posts by Eric Kontos
Macarthur nature photography competition’s back so snap away
Health system set to finally embrace the digital world