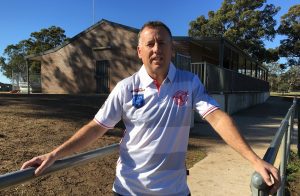 Mexican stand-off: East Campbelltown Eagles president Daniel Draper says “all we want is $290,000 worth of clubhouse”.

There’s no end in sight to a Mexican stand-off between a big local footy club and Campbelltown Council over a $290,000 federal government grant for a clubhouse.

East Campbelltown Eagles say all they want is “$290,000 worth of clubhouse’’.

Council, in response, say the Waminda Oval project has been delayed because the initial design provided by the club was costed at $1.7 million.

A number of alternative designs have been provided but the club has not responded, says the council.

Eagles president Daniel Draper says council’s costing of their plans for $1.7 million is “ridiculous and just doesn’t add up’’ for a club formed in 1961 and currently boasting 28 teams and around 400 players.

“We want something between 150 square metres to 220 square metres and according to a couple of builders involved in our club we should be able to fit it within the budget of $290,000,’’ Mr Draper said.

“We have sent council a couple of plans of what we want, but we haven’t heard back from them.’’

The $290,000 grant originated from a 2016 election promise by the then Federal Member for Macarthur Russell Matheson.

He lost the election but the grant was still made available for a clubhouse next to the current amenities block at Waminda Oval.

Two years later and council and the club are at loggerheads and the project has gone nowhere. 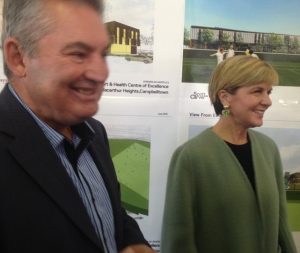 Russell Matheson campaigning in the 2016 election.

“It was to be a blank canvas, we could design it and the $290,000 could be used for that, plus something extra, maybe an electronic scoreboard, extra seating or whatever else,’’ says Mr Draper.

“When we looked at this option, the actual size of the ground, it was fitted in a shoebox, so it was going to be impractical, we couldn’t fit things like parking, plus spectator issues.

“We told the council we won’t go there, wrote them a formal letter from the club.

Mr Draper says the lack of a clubhouse means important player workshops on drugs, mental health and tackling domestic violence are held in the open outside the amenities block.

“The guys are sitting there freezing,’’ says Mr Draper.

“People who come for the workshops, like Alan Tongue, the former Canberra Raiders great, David Peachy (Cronulla) and the Tackling Domestic Violence team, and they all tell us that they have all round NSW 32 clubs and we’re the only one that doesn’t have a clubhouse – when they come we’re the only club that sets up a projector outside, PA system, and we’re sitting outside.’’

Lisa Miscamble, the council director of City Lifestyles, has told the South West Voice “eight designs have been drafted and costed, with the most recent proposal provided to the club for a 144 square metre clubhouse, that falls within the secured funding’’.

“Council has been active in working with the club in drawing up proposals and plans for the clubhouse, including providing construction cost estimates consistent with industry standard estimations of this nature of facility,’’ Ms Miscamble said.

“In addition, the club has been offered use of the adjoining Waminda Avenue community hall for the purposes of the club’s domestic violence and other workshops. The club has declined this offer.

“Council officers are currently working through the impacts of the club’s request to extend the existing building, as this proposal requires the playground to be relocated, which would be at an additional cost to ratepayers.

“The final plans and associated costings need to be confirmed to enable the public tendering process, as per council’s procurement policy. These plans and costings also need to be accepted by the funding body as they form part of the funding agreement,’’ Ms Miscamble said.

The $290,000 Russell Matheson grant is not the only reason the club is at loggerheads with Campbelltown City Council. 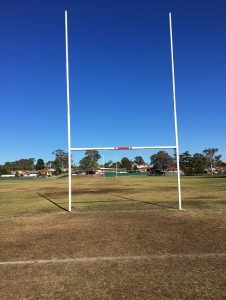 Waminda 2 is the worst playing surface in the Sydney Shield competition, and one of the worst in Campbelltown, says Daniel Draper

Daniel Draper says the playing surface at Waminda is the worst one in the prestigious Sydney Shield rugby league competition, which includes teams from all parts of Sydney.

“Not only that, Waminda 2 is one of the worst playing surfaces in Campbelltown,’’ he says.

“Because we’re playing at such a high level, Sydney Shield, we need a bit more care in the field,’’ he says.

“The guys playing for us are on their way up to the NRL, the national under 20s, so their future relies on playing on good surfaces.

“Teams from Northern Beaches, Belrose, Asquith, the big money clubs, Wentworthville, Mounties, Cabramatta, all over Sydney, they come to Waminda and sadly we’ve got the worst facilities, definitely, in the Sydney Shield.

“That’s not a good look for Campbelltown,’’ Mr Draper said.

Lisa Miscamble says “Council has made significant contributions to improvements at Waminda Oval, including securing and co-funding grants with the State Government for irrigation and floodlighting.

“At this time of the season Waminda Oval playing surface has consistent grass coverage which is in good health,’’ she said.

A progress report on the $290,000 Waminda project is included in the business paper for Campbelltown Council’s next meeting on July 10.

But the Mexican stand-off between the council and the East Campbelltown Eagles is far from being resolved.

More than 40 years experience in the news media, most of them as editor of local newspapers across the Sydney metro area, but a few years working as a sub-editor with the metros. Lots of awards, both as a reporter and editor, but says he values just as much Community Service Awards from Campbelltown City Council in 2004 and 2016. Took a voluntary redundancy in 2014 from Fairfax Community Newspapers after 21 years there. Loves the digital world, because ''there's no question it's the future''. Eric promises his hard hitting but fair approach won't change when he reports the news via cyber space.
View all posts by Eric Kontos
Mayor’s gala dinner will raise funds for domestic violence refuge
Exercise is the best medicine for cancer patients