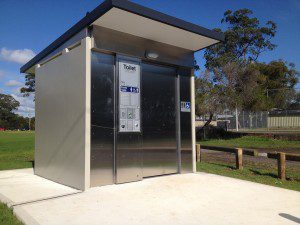 The public dunny of the future is here now, and soon they will be appearing like mushrooms across Campbelltown and Liverpool – Camden will catch up eventually.

Campbelltown is spending some of its new found rates wealth – an extra $60-70 million in the next 10 years, thank you very much – in these fully automated toilets, like this one here, which has been erected on the reserve adjacent to Kentlyn Public School.

The council says as older toilet blocks deteriorate, instead of being repaired they will be demolished and replaced with an automated one.

Liverpool is also embarking on a policy of erecting these new toilets, although some councilors are not happy about the price tag, which is well over the $100,000 mark for each of the toilets.

As for the rest of us, I reckon we will just be glad there will finally be good clean public toilets around.

More than 40 years experience in the news media, most of them as editor of local newspapers across the Sydney metro area, but a few years working as a sub-editor with the metros. Lots of awards, both as a reporter and editor, but says he values just as much Community Service Awards from Campbelltown City Council in 2004 and 2016. Took a voluntary redundancy in 2014 from Fairfax Community Newspapers after 21 years there. Loves the digital world, because ''there's no question it's the future''. Eric promises his hard hitting but fair approach won't change when he reports the news via cyber space.
View all posts by Eric Kontos
Fight goes on against intermodal, despite government move
Iconic Liverpool pub sold for $25 million