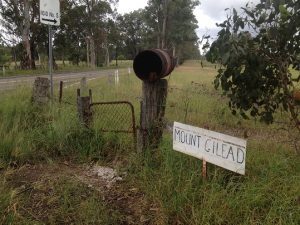 One of the entrances to Gilead along Appin Road, where council has approved 1,700 new housing lots.

The approval last night of plans to rezone historic Macarthur property Gilead for housing will also mean that Appin Road will be upgraded to four lanes from Rosemeadow to the Beulah property further south.

Just three councillors voted against approval after a number of local residents addressed the council to voice their opposition to the proposal.

Under the plan put to council, up to 1,700 new homes will be built over the next few years on around 500 acres of land along Appin Road.

Rezoning of the land was first sought more than five years ago by the proponents.

The process has been slow because of major concerns over air quality, the impact on native wildlife, Aboriginal and European heritage of Gilead and on traffic on Appin Road, among others.

But councillors last night expressed confidence that all of the concerns had been addressed by the various studies and report over the past five years.

“I think a lot of care has been taken to address the concerns regarding this development,’’ Cr Darcy Lound told the council.

The council was told that currently 27,000 cars a day use Appin Road.

Liberal council leader, Cr George Greiss seized on the figures, saying that with an average of three cars per household these days, it would result in around 4,000 more cars on Appin Road.

“This is not a big figure in terms of the number of cars already there and getting Appin Road extended to double its present size is a good deal,’’ Cr Greiss said.

However Campbelltown Council wants wildlife crossings included in the work on Appin Road.

When the proposal was put to the vote, 11 councillors put their hands up for “yes’’ and three for “no’’.

Cr Bob Thompson was absent from the meeting.

The proposal will now go to the NSW minister for planning for his approval.

More than 40 years experience in the news media, most of them as editor of local newspapers across the Sydney metro area, but a few years working as a sub-editor with the metros. Lots of awards, both as a reporter and editor, but says he values just as much Community Service Awards from Campbelltown City Council in 2004 and 2016. Took a voluntary redundancy in 2014 from Fairfax Community Newspapers after 21 years there. Loves the digital world, because ''there's no question it's the future''. Eric promises his hard hitting but fair approach won't change when he reports the news via cyber space.
View all posts by Eric Kontos
Never been easier to get tested for HIV
Residents urged to register their opposition to intermodal