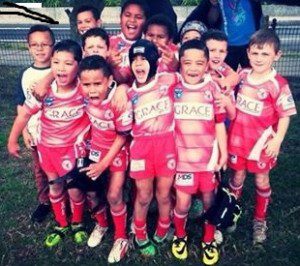 Success: The junior Eagles are going as good as the club’s big boys, with the under 8s div 1 (pictured) and div 3, under 11s and 13s qualifying for their grand finals.

The East Campbelltown Eagles have qualified for the 2014 Sydney Shield finals series after overcoming Burwood North Ryde United 40-30 on the weekend in the final round of home and away matches.

It means the first semi final will pit Campbelltown against Wentworthville, this Saturday, September 6 at Ringrose Park, Wentworthville. Kick off is scheduled at 1:30pm.

It was flying Eagles winger Giovanni Vatuvai with a superb line break that lead to a Wayde Dunley grubbing kick and a Sean Connor try under the posts. Connor converted, then scored a second off a Sam Hoare short pass for the Eagles to sprint to a 12-nil lead.

Hoare put in a brilliant kick for Sama Sauvao to score next to the posts, which was converted for an 18-nil scoreline after just 20 minutes.

A try to Burwood in the corner brought them back into the contest at 18-4.

Burwood scored again in the corner to make it 18-10, before Wayde Dunley busted through the line and got a good offload that saw PJ Hunt crash over for a try under the posts.

Connor, whose radar was on, converted to make the score 24-10.

And then it was on for young and old and the start of a mini try-fest.

Hunt scored his second just before half time. Connor duly converted and it was 30-10.

Then Philipo Sauvao scored right on the stroke of half time, but Connor finally missed a conversion, leaving the score at the break 34-10.

The first 20 minutes of the second stanza came down to defence, with the Eagles blowing a couple of scoring opportunities, but it was Burwood who posted first points to reduce the deficit. The score at that point was 34-14.

But the Eagles hit back with a converted try to Rob Neave to seal the match at 40-14.

Burwood hit straight back with a try in the corner and one more a few moments later. They scored again on full time and the conversion was successful to finish up 40-30.

Eagles coach Gary Potts said after the match: “We are so proud of the guys’ efforts, and for the club to do so well is a credit to everyone.

“The boys are looking forward to the semis.”

Best for the Eagles where Philipo Sauvao, Jacob Nansen and Sam Hoare.