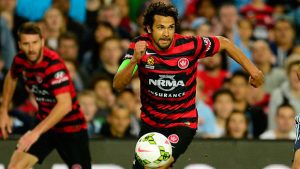 End of an era: Nikolai Topor-Stanley has left the Wanderers to try out hus luck in the Middle East.

The departure on Monday of Nikolai Topor-Stanley is the end of an era even for a young club like the Western Sydney Wanderers.

Following four incredible seasons in the Red & Black, two as captain, the big defender has signed with a club in the United Arab Emirates but he left with the blessing of the club.

Topor-Stanley played in three grand finals and won a Champions League and Premiers Plate in his time with the champions of western Sydney.

“Nikolai was a consummate professional on and off the pitch. His dedication did not just exist at the training ground and on game days, but to the philosophy at the core of our club,” said Wanderers CEO John Tsatsimas.

“He was a core part to our successes both domestically and internationally and his efforts earned him wide praise including a Socceroos call-up and many plaudits from our members and his peers.

“While he leaves us at the beginning of our season, his attitude has been flawless and we commend him on his time with us and wish him well for this next chapter in his career.”

With 125 appearances for the Wanderers including 103 Hyundai A-League, 14 AFC Champions League, five Westfield  FFA Cup and one FIFA Club World Cup appearance, Topor-Stanley was an ever present for the Wanderers and was selected in the PFA Team of the Year in the 2012/13 and 2015/16 seasons.

In 2013 Topor-Stanley was also selected in the FFA’s maiden Foxtel A-League All Stars side that took on Manchester United.
In his farewell message from the UAE, where he has already begun training, Topor-Stanley reflected on his time at the Wanderers.

“In football, opportunities such as this rarely come around and when it was presented to me I knew that it was something I had to explore,” Topor-Stanley said.

“I would like to express my upmost gratitude to the club for allowing me to pursue this opportunity both from a personal and professional level.

“I have always wanted to test myself overseas and this is a great chance for me to experience a different culture in life and in football.

“Firstly I want to thank all my teammates, coaching staff, backroom staff and volunteers past and present that made the last four and a bit years the best of my career so far.

“The Wanderers is a special club that in so little time has captured a nation and I’m sure it’s only the beginning of more great times ahead.

“It has been an honour and a humbling experience to be able to say I was and am a part of the history of this club and I will always hold that close to my heart.

“I consider myself fortunate to have played one game for this club, but to have made over 100 appearances and being given the responsibility to lead the team for the past two seasons was the highest honour.

“While I won’t list and gloat about the achievements this cub has made, I can truly say that every year the expectation was to win everything in which we competed.

“He might not like me saying this but a huge part of the whole club’s success is down to the vision, drive and leadership of [coach] Tony Popovic that has spread throughout everyone at the club to strive for the highest achievement.

“For this I want to thank him for believing in me and giving me the chance to join this club.

“The standards off the pitch are just as high though. Engaging with fans has and always will be the lifeblood of this club and together we have all created something magical.

“Anyone who has been to a Wanderers match knows the feeling and the energy that is created on a match day is difficult to put into words.

“This club belongs to anyone who wants to be involved.

“It transcends gender, racial and cultural background and to me epitomises what Australia is all about.

“To all the members and fans that support this team I would like to thank you all for everything we have shared. You made my time a very special one and we will always be connected.

“Football has an unpredictable nature and although it is goodbye for now you never know when our paths might cross again.”

Festival has something for everyone, including Fisher’s Kids
Campaign wants to lift lid on women’s cancer taboos