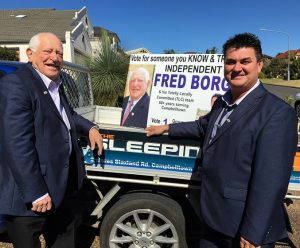 After 17 years as a councillor, Fred Borg doesn’t mince his words.

“At the moment Campbelltown is gridlocked and very shortly the only way we will be able to get around is by helicopter, and even then we may have a problem because we may not have anywhere to land,’’ he says.

Cr Borg, who is seeking re-election on September 10 via his Totally Locally Committed Party, says the lack of vision is lamentable.

“We have roads that should have been done a long time back, we’re redeveloping Claymore, and yet no Badgally Road upgrade to connect us to Gregory Hills where they have put the motor registry.

“This is not forward thinking,’’ Cr Borg says.

Since getting elected in 1999 Cr Borg has tirelessly called for action on Appin Road.

He’s on the record as saying he will not vote for one more dwelling to go along Appin Road, which he confirms when I interview him and his number two candidate, businessman Warren Morrison.

“The thing I am saying to the people of Campbelltown as I ask them to re-elect me is OK, government wants growth, let’s have growth, but let’s have it with infrastructure.’’

Cr Borg is adamant growth in and around Campbelltown should not come at the expense of open space.

“I’m all for high rise, I’m on the record for high rise all along Queen Street, high rise along the railway line, but at the same time we want to be able to get out of them buildings and travel, go places, and without that right infrastructure we can’t do it.

“We need to make sure we maintain green space – this nonsense of having schools six storeys high without a playground, that’s what’s going to happen in the future,’’ Cr Borg says.

“I can’t believe that’s what we’re coming to, this beautiful land of ours, so sparse, yet we want to so densely populate it that we’re not even going to have a playground for our kids.’’

There are 11 candidates listed on his Totally Locally Committed Party ticket but realistically only one or two will get elected to council, so I ask Cr Borg why he chose Warren Morrison on the number two spot.

“Warren is a businessman, a very successful one.

“He has a lot of interests. He’s in the chamber of commerce, he supports a lot of the local clubs.

“Warren is very much involved in charities around town, actively involved, not just a donor, puts himself up for a lots of things.

“And that’s the kind of person I’d like to think I am; I believe he would be a good councillor and he will contribute at the meetings, he’s got lots of good ideas, and I am proud to make him number two and I hope I can get him elected,’’ Cr Borg says.

Mr Morrison met Fred Borg a long time ago and liked the way he does things in the community.

“I came on board helping him with 24 Hour Fight Against Cancer Macarthur,’’ says Mr Morrison.

He then got on board to help Cr Borg at the last election and he says that was a good learning curve for him, meeting other councillors and officers of the council.

“I have been in business here for 20 years, have lived here for 30 years, I know the area and my family’s grown up in this area as well, so in doing that I’ve known a lot of people, I’ve grown with a lot of people,’’ Mr Morrison says.

“With the business I’ve been lucky that it was successful so I could get behind a lot of local sports.

“At the end of the day you get behind these things not just for your own children but for all the community, and all kids need help when it comes to that little bit of sponsorship.’’

Mr Morrison says he would like to see a boost to public transport, such as buses, on the western side of Campbelltown.

“We should be able to get people into Campbelltown a lot easier and a bus service along Blaxland Road would help,’’ he says.

“Campbelltown’s got a great retail sector, and locals don’t have to leave the area to go and buy household goods.

“But people in the new estates like Gregory Hills should have access to public transport into Campbelltown, which they do not at the moment.

“We have the railway infrastructure but when you get off that train how do you get to the retailer? You walk and people don’t want to walk.

“There are some bus services but not enough,’’ Mr Morrison said. 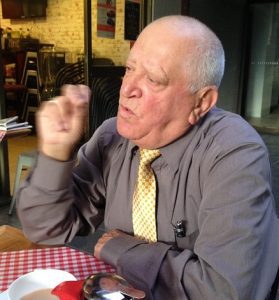 Mr Morrison thinks a café and dining theme may be the way to go in the future.

“Times change, there are big shopping centres now, so Queen Street will have to be like Camden, little coffee shops, a little park where kids can play, a place the people want to visit,’’ he says.

Cr Borg says there’s pedestrian traffic in Queen Street, but not shopping traffic because there’s “nothing really to attract them’’.

“The only thing keeping Queen Street alive is Campbelltown Mall, apart from that there’s nothing, and the types of coffee places we have at the moment, well I’m very sorry, but they’re not attractive.

“That doesn’t mean I’ve given up on Queen Street but you’ve got to be honest with yourself.’’

2 Responses to Cr Borg cites lack of vision for gridlock