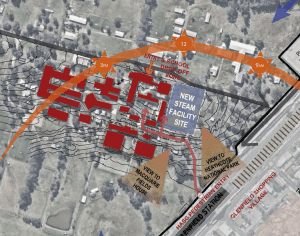 This artist’s impression of proposed changes accompanied the DA lodged by the department of education for the Hurlstone Agricultural High School site at Glenfield.

But the council has no authority to approve or reject the DA, which was lodged by the NSW Department of Education on November 14 last year.

As the cost of the works listed in the DA is more than $5 million, the Sydney West Planning Panel will determine the application.

However, the assessment and notification responsibilities remain with council staff and the process is no different from that of any other DA.

A senior council source told the Voice that council will consider making a submission to the Panel.

The council, local members of parliament and much of the community remain opposed to plans to relocate the Hurlstone name and build a new high school at the Glenfield site.

Last week Macquarie Fields MP Anoulack Chanthivong called on council to stand by its opposition to the proposed changes for the historic Campbelltown school.

The government plans for the site also include massive new housing on the farm land surrounding Hurlstone.

The DA lodged by the department seeks approval for the demolition of an existing cottage, green houses, demountable rooms, goat shed, agricultural staff room and partial demolition of the front of building I.

None of the structures identified for demolition by the DA are identified as significant buildings with regard to the heritage listing for the site.

There will also be a partial refurbishment of a building to provide a new woodwork and metal workshop with store rooms.

The main structure proposed is a single storey one.

The Voice was told that Campbelltown Council staff will deal with the DA until it is ready for reporting to the Panel.

But while the Panel has been notified of the application it will have no involvement until the DA is ready for reporting.

This floor plan was part of the DA lodged with Campbelltown Council.

More than 40 years experience in the news media, most of them as editor of local newspapers across the Sydney metro area, but a few years working as a sub-editor with the metros. Lots of awards, both as a reporter and editor, but says he values just as much Community Service Awards from Campbelltown City Council in 2004 and 2016. Took a voluntary redundancy in 2014 from Fairfax Community Newspapers after 21 years there. Loves the digital world, because ''there's no question it's the future''. Eric promises his hard hitting but fair approach won't change when he reports the news via cyber space.
View all posts by Eric Kontos
Simmo’s Beach: our famous landmark focus of Clean Up Australia Day
Calls to keep Land Titles Office in public ownership