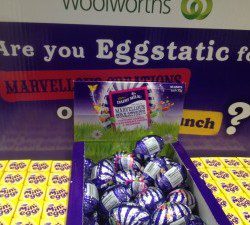 There’s more to Easter than chocolate eggs, even though they are part of the tradition.

As we head into another Easter break I couldn’t help thinking about our approach to an activity based on an event 2,000 years ago.

That’s right you smarties up the back, Easter is not just about how many chocolate eggs you get.

It certainly is not just about chocolate but never mind, at least it comes in the shape of eggs which is part of the religious tradition of Easter.

Apparently some Christians have been giving each other chocolate eggs for around 100 years.

But even though the eggs are a symbol of the resurrection of Jesus Christ and the chocolate merely incidental, few people remember where the tradition started.

Like most of you I rarely go to church these days, except for baptisms, weddings and funerals.

So don’t think for a moment you’ve got a bible basher here at the South West Voice trying to make you feel guilty so you go to Mass on Easter Sunday.

But you don’t have to be a practising Christian to know the story of Jesus Christ, and Easter is as good a time as any to remind yourself as well as tell others of what Jesus Christ did all those years ago.

Like many people I’ve read the story of his betrayal by Judas and his capture by the Romans and it seems that Christ could have got away that fateful night in Jerusalem.

It’s as if he wanted to be caught and crucified alongside run of the mill murderers.

Well it seems by all accounts all his life, 33 years of it, Christ fought for justice and truth and honesty and integrity, and his sacrifice on the cross was the ultimate expression of that.

It was done for his fellow citizens to see the right way forward was the way Christ has shown for 33 years.

And have we learned this lesson 2,000 years down the track?

A fair answer would be that we have made some progress but more needs to be done if we are ever to eradicate the human failings Christ railed against, like greed and selfishness.

By all means enjoy eating a chocolate egg or three this Easter, but remember that we should also try to reflect on our approach to life.

♦ The NSW state election has come and gone, with the Coalition government, or Baird government, as it will forever be known, returned to power with a reduced majority.

The Libs and Nationals therefore get another four years at the helm and they might need all of that time to lease the poles and wires.

Expect also to see some action in local government, including forced amalgamations.

The perception in Macquarie Street is that councils are by and large an expensive joke and couldn’t run a chook raffle in some cases.

I put that notion to one of our south west Sydney mayors and his response was interesting, to say the least: “There’s others, you know, who think we need only two levels of government, federal and local.’’

This is not a new idea, to get rid of state governments and replace them with giant regional councils. But don’t hold your breath.

Speaking of the great south west, we have a couple of new faces representing us in the big house in Macquarie Street, both Labor Party reps, Greg Warren in Campbelltown and Anoulack Chanthivong in Macquarie Fields. I wish them both well.

♦ And finally I couldn’t finish without mentioning the storm in a teacup about Shane Warne’s “thirsty’’ comments and questions after Australia won the cricket world cup last week.

Who got upset? Well, round up the usual suspects, as they say in the classics.

Who else but the ABC, on TV and radio, and their soul mates in old print media, Fairfax’s SMH.

So Shane-o asked some of the players if they were going to have a few drinks to celebrate – and asked them and asked them, again and again.Big deal. It’s still legal to enjoy a drink or two in this country last time I looked.

Yes, he overdid it, but so bloody what, this is Shane Warne we are talking about, not Tony Jones on Q&A.

Warney was a great cricketer and is a great bloke who has a couple of faults. Not something that you’d come across the ABC or the print mob, no. They are all perfect human beings.

But it’s typical of where our money is wasted on in the ABC – first world problems real people wouldn’t give two hoots for.

Here, ABC, I’ll tell you what a real problem is: people around here in Campbelltown wake up at 4.30 in the dark to get ready for the long trip to work, which is a spirit sapping  one, one and a half or two hours away.

Then there’s the trip home. Then they have to wake up and do it all again, five days a week, 48 weeks a year.

There’s a bloody story you should be spending taxpayers money investigating, not some silly comments from a retired cricketer.

The truth is if you took out all these first world issues such as same sex marriage and refugees and politically incorrect stuff, these people would be totally mute; they wouldn’t have anything to talk about.

More than 40 years experience in the news media, most of them as editor of local newspapers across the Sydney metro area, but a few years working as a sub-editor with the metros. Lots of awards, both as a reporter and editor, but says he values just as much Community Service Awards from Campbelltown City Council in 2004 and 2016. Took a voluntary redundancy in 2014 from Fairfax Community Newspapers after 21 years there. Loves the digital world, because ''there's no question it's the future''. Eric promises his hard hitting but fair approach won't change when he reports the news via cyber space.
View all posts by Eric Kontos
Online service makes it easier than ever to deal with council
Parents rejoice: school holiday program’s got you covered