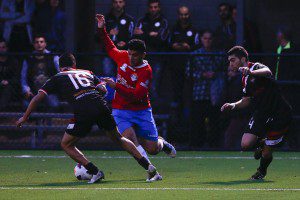 There was barely any time left on the clock when a cross from the left by Matthew Lewis struck the arm of Chris Tadrosse.

It was actually the 92nd minute.

But referee Michael Weiner had no hesitation in pointing to the spot and Kearyn Baccus made no mistake, tucking it past Tristan Prendergast to score the only goal of the game to send Blacktown City to the 2014 grand final of the NSW men’s 1 competition.

Their opponents, Bonnyrigg White Eagles, were left to ponder what might have been had the referee decided to go the other way and the match went into extra time.

In truth, the match looked headed for extra time long before Baccus’s intervention. The game was laboured and neither side managed to get the ascendancy. Indeed, it only opened up in the final 10 minutes and it was then that Blacktown City capitalised.

It means that they will head to the grand final in a fortnight’s time, while Bonnyrigg White Eagles will face Sydney Olympic in this weekend’s elimination. Olympic thrashed Blacktown Spartans 3-0 on Sunday at Lambert Park.

Blacktown City had an early opening when the lively Mitchell Mallia burst through, only to be denied by a superb one handed save by Tristan Prendergast, who was standing in for the injured Matthew Nash.

It was a rare opening in a first half that promised much before kick off, but did little to deliver on the park.

Bonnyrigg first threatened in the 23rd minute when Alexander Canak burst down the right. He crossed low and hard but the foot of Blacktown City goalkeeper Nenad Vekic diverted it from danger.

A deflected shot from Sasa Macura followed shortly after, but they were the only opportunities, if you could call them that, of the opening stanza.

Blacktown City thought they should have had a penalty early in the second half when Mallia was smashed by Dylan Fox in the area, but no favour was forthcoming from referee Michael Weiner. It certainly looked like Mallia had a case though.

Just after the hour a long range effort from Adrian Ucchino whistled narrowly over, before Aaron Peterson headed goalwards from a Mansuetto cross, only to see his on-target header clawed away by the flying Vekic

It was the best chance of the game and for a long time it looked like it would fly in, but Vekic had other ideas. It was a crucial save in the end.

Mallia stood a cross up to the back post that was knocked down by Zac Cairncross, but Major missed a glorious opportunity, scuffing wide from a few yards out.

Mark Crittenden gambled, replacing the talismanic Major with Danny Choi. Major had been quiet and Choi was excellent when he went on, probing and creating a number of good openings.

A beautiful pass by Baccus in the 74th minute released Ryuji Miyazawa, but he shot straight at Prendergast from a good position. Baccus then gave the ball away in midfield, but made a wonderful recovery as Bonnyrigg looked to release Younis.

The influential Baccus then had a shot from the edge of the area with 10 minutes to go, driving it only narrowly wide.

A dull match delivered a frantic crescendo though. In the 86th minute, Choi showed delightful skill to leave three Bonnyrigg defenders behind. He was bearing down on goal and when all he required was composure and accuracy, he instead blasted his shot straight at Prendergast.

Then, a header from Matthew Lewis was cleared off the line by Ben Spruce with Prendergast out of position.

The late drama reached a crescendo when Weiner pointed to the spot and Baccus sent his team to the grand final to be held at Sydney United Sports Centre on Sunday, September 14.

Your business can learn how to say ‘how Tweet it is’
Lions in grand final, but Jets are grounded