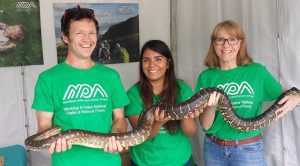 Staff from the National Parks Association of NSW holding a python ahead of this Saturday’s Blair Athol Bush Adventure.

If you and your family enjoy the outdoors you’ll love Blair Athol Bush Adventure this weekend.

This kid friendly event which celebrates the local wildlife will be on at John Kidd Reserve from 12 noon to 3.30pm, this Saturday, June 23.

Blair Athol Bush Adventure is run by National Parks Association of NSW as part of their Bush Mates project, and in collaboration with Campbelltown City Council.

“Bring your family and friends to this event and get up close and personal to some native animals at the live animal display,’’ says Stephanie Clark, a Citizen Science Officer at the National Parks Association of NSW.

“You can also have a romp around in the bush on a nature walk and learn more about the endangered Cumberland Plain Woodland and the animals that call this magical place home.

“There’s also going to be face painting, workshops, a free barbecue and a  native plant giveaway so you’ll get to take a memory of the day home with you.

“You’ll also be able to see the great work the Bushcare volunteers are doing to rejuvenate the bushland at John Kidd Reserve,’’ Ms Clark said.

If you like, you can join the team of volunteers by contacting Campbelltown Council’s Environmental team on 4645 4601 or email environment@campbelltown.nsw.gov.au 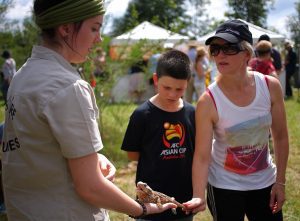 “If you’re a local we suggest walking or wheeling to the event to enjoy a full day in the outdoors,’’ Ms Clark said.

To get your free tickets visit Bushmates.org.au/events

More than 40 years experience in the news media, most of them as editor of local newspapers across the Sydney metro area, but a few years working as a sub-editor with the metros. Lots of awards, both as a reporter and editor, but says he values just as much Community Service Awards from Campbelltown City Council in 2004 and 2016. Took a voluntary redundancy in 2014 from Fairfax Community Newspapers after 21 years there. Loves the digital world, because ''there's no question it's the future''. Eric promises his hard hitting but fair approach won't change when he reports the news via cyber space.
View all posts by Eric Kontos
Local smokers wanted for new quit study
State Budget: wrong priorities, unfair, say local Labor MPs