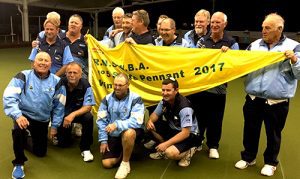 Winners are grinners: Bargo celebrate their memorable victory in the state final on the weekend.

After having conquered clubs much bigger than itself in Zone 5 (Greater Western Sydney) to qualify for the 2017 state finals, Bargo went all the way on the weekend.

Troy Slater, club president and a member of the winning team, said it was the first time Bargo had won a state title since it was formed way back in 1964.

“This is the highest accolade available in NSW lawn Bowls and is a most auspicious victory,’’ he said.

“It is a highlight in our club’s history.

“It’s a huge effort for such a small club against many of the huge city clubs – we only have around 55 active bowling members compared to the larger clubs, some of which have more than 300 bowlers,’’ Mr Slater said.

To make the state finals Bargo had to qualify through the Zone 5 Pennants competition, which had 15 teams entered this year.

Bargo beat teams such as Crookwell, Pitt Town and Wentworth Falls to qualify for the finals.

The 2017 finals were held at Fingal Bay Bowling Club and Soldiers Point Bowling Club where representative clubs from 16 NSW zones in NSW competed.

Bargo didn’t start their finals campaign well, going down in their first sectional clash against Wiseman Park Wollongong City on the Friday night.

But after victories against South Lismore and Northmead on the Saturday, the boys from Bargo were on their way to the top of the mountain.

They defeated Mingara in the semi final at Soldiers Point on Sunday morning to qualify for the final against Beresfield.

Roy Slater says the final was “a super close match, and an absolute fantastic game of bowls’’.

The game was in the balance right up until the very last end, but after 63 ends of bowls, Bargo emerged the victors 58-52.

“This is the pinnacle of lawn bowls and something every player strives for – like a grand final victory in the NRL, this is something that the majority of lawn bowlers will never achieve throughout their entire lifetime,’’ Mr Slater said.

“The team played extremely well throughout the entire season and got a very well deserved result for a bunch of players who combined as a true team.

“Not only was the quality of bowls fantastic throughout the entire season, the way these men represented their club and their zone both in their bowls and their attitude was something we are very proud of.

“We also want to thank those supporters who travelled from Bargo to support us not only in these state finals but throughout the entire year,’’ Mr Slater said. 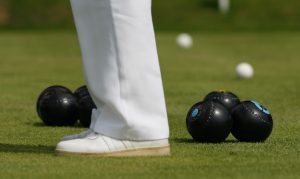 Some bowls are waiting on the Crown Green Bowling pitch.

Bargo’s 2017 state champion team will be remembered for a long time after their victory in the final.

For the record, here are the names of the Bargo players who helped win the state title:

More than 40 years experience in the news media, most of them as editor of local newspapers across the Sydney metro area, but a few years working as a sub-editor with the metros. Lots of awards, both as a reporter and editor, but says he values just as much Community Service Awards from Campbelltown City Council in 2004 and 2016. Took a voluntary redundancy in 2014 from Fairfax Community Newspapers after 21 years there. Loves the digital world, because ''there's no question it's the future''. Eric promises his hard hitting but fair approach won't change when he reports the news via cyber space.
View all posts by Eric Kontos
Minerva Pools part of Dharawal National Park walking tour
August drive gives homeless women access to sanitary products